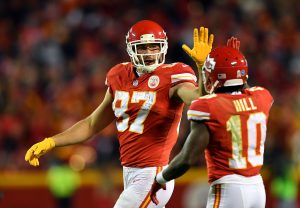 Tight end Travis Kelce has had arguably the best season a tight end has ever had. The Browns will likely try to make linebacker B.J. Goodson cover him, but expect linebacker Jacob Phillips, linebacker Mack Wilson and linebacker Sione Takitaki to all play a role in trying to stop Kelce. The Chiefs’ other star is speed demon wideout Tyreek Hill and the Browns will need cornerback Denzel Ward to be able to shut him down, even in single coverage. Ward hasn’t allowed over 80 yards to a player since his Ohio State days, but this is arguably his toughest task yet. With Sammy Watkins out, the Chiefs will have wide receiver Mecole Hardman as their second wideout and the Browns should force him to make big plays.

The Browns will have to play their best game of football in decades to win, but they have the team to do it. The game may come down to which team gets to fire the final bullet, but it’ll require the Browns defense to do enough to keep the Browns in it.