The Browns will take on the Steelers for the second consecutive week, though they will have to face a full-strength Steelers team this time. It’s the biggest game that the Browns have played in since they returned in 1999 and they’ll have to go in and win at Pittsburgh, something they haven’t done since 2003. The Browns will be getting many players back off of the COVID-19 list with Harrison Bryant, Ronnie Harrison, Malcolm Smith, B.J. Goodson and Andrew Sendejo all available on Sunday. However, Denzel Ward will not be able to play, even though it seemed possible that he would earlier in the week. On Tuesday, head coach and Coach of the Year hopeful Kevin Stefanski tested positive for COVID-19, as well as Pro-Bowl guard Joel Bitonio. Both will be unavailable on Sunday. Special teams coordinator Mike Priefer will step up in Stefanski’s place, though Alex Van Pelt and Joe Woods will handle play calling for the offense and defense respectively. Due to the number of positive tests, the Browns have only practiced one time this week, so it’ll be a very difficult task to go into Pittsburgh and pull off the upset. However, the Browns certainly have the talent to knock off the Steelers.

Key #1: Dominate on the Ground 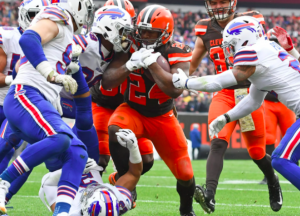 The Browns started off last week’s game against the Steelers with a dominant drive rushing the football and concluded it with a 47-yard touchdown run by Nick Chubb. Chubb picked up 61 yards on the drive but had just 47 yards the rest of the game. The Browns did have nearly 200 yards as a team, but a surprisingly large chunk of the Browns yards came from Baker Mayfield, who had 44 yards, which was a career-high. It’ll be more difficult to establish a run game this week, as Joel Bitonio is out with COVID-19, Jack Conklin is questionable to play with a non-COVID illness and the Steelers will play both T.J. Watt and Stephon Tuitt, both of whom will make running the football more difficult. The Browns are undefeated when Nick Chubb gets more than 20 carries or when any individual player rushes for over 100 yards. Pittsburgh’s run defense has allowed nearly 160 yards per game over the last three games, so it’s crucial the Browns keep the pressure on.