The Browns will look to start 6-2 for the first time since 1994, but they will have a tough matchup against the Las Vegas Raiders. The Raiders offense has erupted at times this season and with the Browns defense being the fourth-worst at preventing points; it’ll be a challenge. The Raiders have been hot and cold this year with impressive wins over the Chiefs and Saints, but they also have blowout losses to the Buccaneers and Patriots. This game could have playoff implications. The Browns are currently in by a game while the Raiders sit one game behind the Colts. It could be a huge game to have a head to head tiebreaker for if the teams end up with the same record at the end of the year.

Key #1: Spread the Ball Around

With the loss of WR Odell Beckham Jr. for the rest of the season with the ACL tear, the Browns receiving corps is now WR Jarvis Landry, WR Rashard Higgins and last week’s hero, WR Donovan Peoples-Jones. While on paper this receiving core is definitely worse without Beckham, it is very similar to the corps that were on the team in QB Baker Mayfield’s spectacular rookie year. Higgins had over 100 yards in last week’s thriller over the Bengals, while the aforementioned Peoples-Jones caught his first career pas and will become a much bigger part of the offense this week. Alongside the wide receivers, TE Harrison Bryant caught two touchdowns last week and he will start for the second consecutive week with normal starter TE Austin Hooper still recovering from his surgery for appendicitis.

Key #2: Get the Ground Game Going 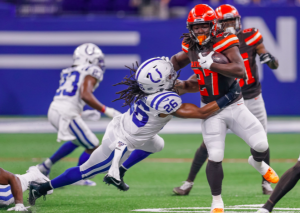 When RB Nick Chubb went down with his Achilles injury against Dallas, it seemed certain that RB Kareem Hunt would absolutely dominate in his place, but that hasn’t been the case. He’s been solid, amassing nearly 200 yards in the last three games, but he hasn’t rushed for more than 100 yards in any game. The Raiders offense is definitely their strength and if Hunt and backup RB D’Ernest Johnson can pound the rock, it will allow the Browns to keep the Raiders on the sideline and give their defense some major breathers. The Browns are 9-4 in the Baker Mayfield-era when someone has a 100-yard game, so if Hunt can get there on Sunday, it’ll be a big helping hand. 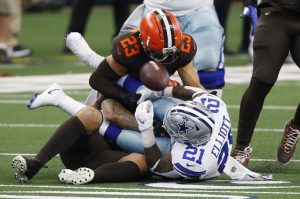 While the defense was about as effective as paper last week in Cincinnati, they forced two key turnovers. A CB Denzel Ward deflection that turned into a LB B.J. Goodson interception in the end-zone, as well as a DE Myles Garrett strip-sack that turned into a field goal. In a three-point game, the 10-point swing that those turnovers created were huge. However, a dropped interception by CB Terrence Mitchell could have been the difference had Mayfield not led the team down the field to win it at the end. If the Browns can force a couple of crucial turnovers that may be enough to beat a Raiders defense that has allowed 32.8 points per game, worst in the AFC.

Key #4: Get Pressure on Carr

Raiders QB Derek Carr was sacked just four times in the Raiders’ three victories this season, compared to seven in their three losses. With DE Myles Garrett leading the league in sacks with nine and strip-sacks with four, that will surely be the focus of the Raiders offensive line. If players such as DE Olivier Vernon or DT Sheldon Richardson can create havoc in the Raiders backfield, that could help Garrett out just enough for him to add on to that tally and make a game-changing play on Sunday. Carr ranks seventh in yards per pass thrown, so if the Browns can force him to make quick throws, it won’t allow him and the Raiders to set up the deep passes they’ve relied on this season. 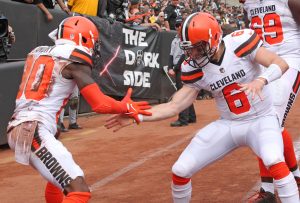 One of the major reasons that the Browns were able to come back against the Bengals was that they didn’t have to settle for a field goal once in the second half. This has been key for the Browns this season as they have scored a touchdown 79% of the time they get in the red zone, which is third in the NFL. The Raiders aren’t bad either at 64%, but that could be the difference on Sunday. The Raiders are among the worst at preventing touchdowns in the red zone, while the Browns are mid-pack. If the Browns can score touchdowns and force field goals when it matters, they will win on Sunday.

It’ll require another strong game from Mayfield, but the Browns certainly have what it takes to win on Sunday, which will be another step towards proving that they belong in the postseason.