5. Be Successful on Third Down 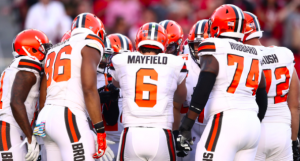 The Browns went just 5/13 on third downs and three of those conversions were due to penalties by the Ravens. On the other side of the football, the Ravens converted 6/11 third downs. The Bengals weren’t great on third down either, converting 6/14 third downs. However, the Bengals defense was solid on third down, stopping the Chargers on 10/16 third downs. It will be especially important for the Browns to convert on third down considering they will be using Cody Parker as their kicker (since he just started three games last season).

This game is about as must-win as a Week 2 game can be.  A 0-2 start is a horrible way to start the year, especially with a loss to the predicted cellar-dwelling Bengals. They’ll have to play better than they did last weekend, but they certainly should beat the Bengals.