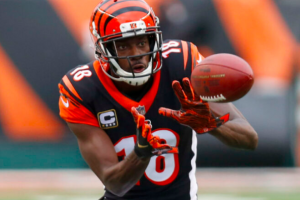 A.J. Green is the best receiver in Cincinnati and he was Joe Burrow’s favorite target in Week 1. He only caught five passes for 57 yards, but he caught the ‘would have been’ game-winning touchdown that was negated by the offensive pass interference call. Green missed all of the 2019 season due to torn ligaments in his ankle, but in his other eight seasons in the NFL, he has made seven Pro Bowls. Green is only on a one-year contract, so there is a large amount of pressure to show that he is still the same talented wideout. If the Browns can shut him down, it will ease the stress on the secondary, as players like C.J. Uzomah and Tyler Boyd would need to step up in his place.