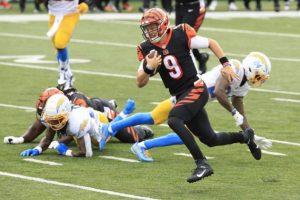 Joe Burrow was the best quarterback in college football last season, but just like nearly every rookie quarterback, he was less-than-perfect in his debut. He completed 23/36 passes for 193 yards while throwing an interception. He also ran for a touchdown. He was sacked three times. He is mobile, but he doesn’t have anything like the rushing ability that Lamar Jackson had. If the Browns can force the rookie out of the pocket and into making rushed throws and poor decisions, they can make big defensive plays.