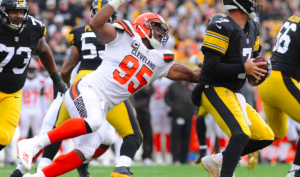 The last time that DE Myles Garrett played against the Steelers, he was ejected and later suspended for hitting QB Mason Rudolph with his helmet. Since he returned from his suspension, he has been dominant, leading the AFC in sacks with six over the first five weeks of the season. If the Browns are to beat the Steelers this week, Garrett will have to continue his rampage of opposing quarterbacks that he has gone on thus far in this season.

The History of The Browns Vs. The Raiders

The History of The Browns Vs. The Raiders