The Browns will play in Jacksonville on Sunday, looking to move to 8-3 for the first time since 1994 and to clinch a non-losing record for just the third time since they returned to the league in 1999. It’s a must-win game for the Browns if they are to stay in the playoff hunt. The Browns will be without DE Myles Garrett for a second consecutive game, as well as missing CB Denzel Ward after he strained his calf in last week’s victory over the Eagles. However, the defense will still try to continue with their strong performances of late and it will be easier as the Jaguars are starting Mike Glennon at quarterback, who came into the season as the third-string quarterback. QB Baker Mayfield will look to play well in his first game without inclement weather in over a month, something that will be made even easier as four of the five top corners on the Jaguars depth chart ruled out. 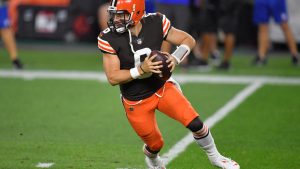 Baker Mayfield had the best game of his career five weeks ago against the Bengals. He is yet to throw for over 205 yards since then, though there has been rain in each of the last three games. As mentioned earlier, the Jaguars secondary is decimated, which gives Baker an opportunity to play very well. While the game against the 1-9 Jaguars may not be the one where the Browns need Baker to make some big throws. In the upcoming games against the Titans and Ravens, both of whom are in the playoff hunt, the Browns will likely need Mayfield to play well. The Browns are 4-0 when Mayfield throws for over 200 yards and they are 7-1 when he throws for over 130 yards. If Mayfield can have a breakout game, the Browns might be able to dismantle the Jaguars.