James Washington of Oklahoma State is easily my favorite wide receiver in the 2018 Draft. The man is an absolute stud and will be a game changer the instant he steps on the field as a rookie.

James Washington had an extremely impressive career at Oklahoma State. He ended his career leading the Cowboys in receiving yards (4,472), 3rd in receptions (226) and 3rd in touchdowns (39). In his final season, he lead the nation in receiving with 1,549 yards on 74 catches, while also hauling in 13 touchdowns. This led him to win the Fred Biletnikoff award, which is given to the most outstanding receiver in the nation. The man is an absolute machine.

What is holding Washington back from being a top-10 pick and the #1 receiver in the class is his size. He stands at 5’11” and 213 lbs, but don’t let his smaller frame fool you. He is a receiver with unbelievable burst when the ball is snapped and can create space with the best corners. There are concerns about his ability to run complex routes, but that can be taught at the next level with the right coaches. When you watch him play, he normally runs basic routes, but that is how football is played in the Big 12. He doesn’t look the part of a go-to receiver, but when you watch him play and see how open he is able to get, you understand he is a threat that needs to be neutralized on every down. When he gets to the league, he will be able to expand his route tree and run with the best of them.

He reminds me of Keenan Allen when he doesn’t have the ball in his hands, but once he catches it he is a threat like a Golden Tate to make the right moves and take the ball all the way.

James Washington is projected to go late first round and if somehow he is there at 33, the Browns should 100% take him. He would be the perfect #3 receiver to Josh Gordon and Jarvis Landry; he would also help out tight end, David Njoku. Regardless of the team he goes to, I am excited to watch Washington play in the NFL, as he will be a star in my eyes.  Every team that is receiver-needy and passes on him will regret their decision. If the Browns somehow move back up into the later part of the 1st round with three 2nd round picks to play with, I hope they have their eyes on Washington. 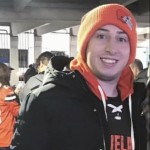 Why the Browns had the Best 2019 NFL Draft