The Cleveland Cavaliers are suddenly good again. Well, maybe not so suddenly. The Cavs have been slowly building a playoff-contending team. Since LeBron left the Cavs to join the Lakers, they have been near the bottom of the league in rankings. However, that has given them the chance to build a fantastic team for the future and that future is now.

Between Collin Sexton, Darius Garland and Evan Mobley, the Cavs have had great draft success. Now you may be saying, Collin Sexton doesn’t even play for the Cavs. That’s right, but he was the main piece in a trade that landed the Cavs Donovan Mitchell. Cleveland has also had great success in making trades around the league. Landing Jarrett Allen by joining in on the James Harden blockbuster to the Nets was one of those moves. Adding Ricky Rubio and Caris LeVert have been big additions made via the trade as well. We also all know very well about a certain Utah Jazz player that was just acquired from the Jazz and is averaging 31 points per game through five games with the Cavs. 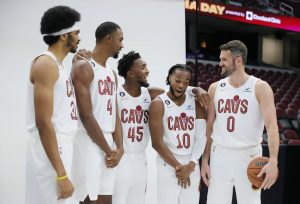 Who is the most important of all those players listed? Evan Mobley. The Cavs have assembled one heck of a team, but that team can only go as far as Mobley can take them. Darius Garland can be and almost is a top-five PG in the NBA. Donovan Mitchell will continue to be one of the best scorers and shooting guards in the league. Jarrett Allen is going to keep his status as an elite defensive, rebounding and shot-blocking center. Those three players will maintain their reputations and earn a few All-Star game appearances as the years go by. But it’s Mobley who has the chance to be truly generational.

Evan has a body type that is built for today’s NBA. Mobley is 7’0″ tall and 215 lbs. He has added a lot of muscle to his slender frame this offseason as well. He is about as nimble and agile as it gets for a big man. It’s one thing to have his body style, but it’s a whole different story when you pair that with his skills. Mobley can bring the ball up the floor, shoot turn-around jumpers with ease and pass the ball very well for a big man. He is so smooth when he is driving to the basket and he can pretty much get from the three-point line to the rim in just one dribble. Do you know who else can drive like that? Giannis Antetokounmpo.

The comparisons for Mobley’s play style don’t stop with the Greek Freak. He has been compared to Pau Gasol, Anthony Davis, Kevin Garnett, and Chris Bosh. It’s fun to compare him to these players, but I think he has a chance to be better than all of them. I can really see him being the best player in the NBA in just a few years. I don’t think it’s crazy to imagine him winning at least one MVP award, if not multiple.

There is something to be said about expectations, however. It can be a lot to put these expectations and comparisons on his plate. Though, the Cavs have built such a great team around him that he can play at his own speed and not be expected to be the leader of a franchise immediately in his career. The Cavs have something special brewing here in Cleveland and Mobley has the chance to take them over the top.