I GREW UP IN East Cleveland, Ohio as a child. Attended Rozelle and Superior Elementary Schools and the famed Kirk Middle School, home of the Mighty Demons.

I also grew up playing for the Historic and Hometown East Cleveland Chiefs pee wee football team. Every year I played, we were shooting for making the playoffs. Not just for bragging rights, but for the chance to possibly get the chance to play at Shaw Stadium or “The Stadium” for those who hold that place near to the heart.

On top of championship success, the Stadium was home to multiple names of Cardinal lore. Players such as the Rod “The Hammer” Williams,  “Cookie Monster” Darwin Cook, Scooter MCdougal, Sean Coffey and Buffalo Bills great Darryl Talley all called the inside of that stadium home. 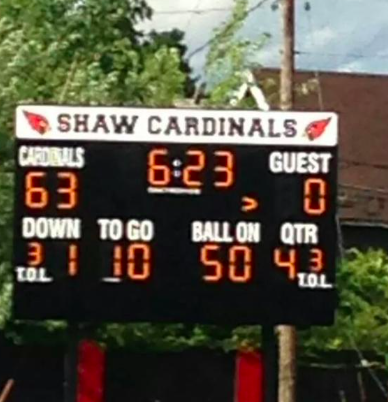 What most people would know is that Shaw Stadium also housed more than just the Cardinals. In 1938, the Cleveland (now L.A.) Rams played their home games at Shaw Stadium, winning three out of four home games that year. The Case Tech Rough Riders and their Rivals the Western Reserve Red Cats (both now known as Case Western Reserve University Spartans after their merger) calling Shaw Home. With Case Tech playing there from 1939-1952 and Western Reserve playing there in 1942, 1946, and 1950. This was one of the few stadiums in Northeast Ohio to have locker rooms on the home and visitor side. As well as a home and visitor side concession stand. For a very VERY long time, Shaw Stadium was state-of-the-art. At one point housed 10,000 fans, which made Shaw one of the largest stadiums in Northeast Ohio in the stadium’s heyday.

Sadly, in 2020 during a covid season, Shaw Stadium was condemned and the Cardinals were forced to play their home games at traditional rival Euclid High School’s Sparky Stadium. The Cardinals would make the state playoffs, but not being able to play in the friendly confines of Shaw Stadium was bittersweet to many including me as my mom, aunt, uncles and many, many childhood friends graduated, attended, or came through Shaw High in one way or another. We always knew it was a game day on Friday or Saturday nights’ because what most Shaw alumni would tell you is the real “BADDEST BAND IN THE LAND” could literally be heard all down Euclid avenue and miles around.

To say I’m not sad would be lying to myself as well as the many who have ventured through that historic and iconic stadium. At the time of this writing, there is no other news coverage of this and it should be, but for me. I’m going to take a trip down Shaw Avenue and see the place I once called home as an athlete one last time. So for those that know it, say it with me…

WE ARE SHAW HIGH!!

Did Paul Pierce Deserve to Get Fired From ESPN?

1 thought on “END OF AN ERA: SAYING GOODBYE TO SHAW STADIUM!!”