The logic is simple.

The Cavs are keeping center Andre Drummond benched in street clothes because he is on the trade market. The organization doesn’t want Drummond to get hurt in action and thus not be of any value before the March 25 trade deadline.

I want to feel sorry for Andre and then I remember that he is making $28.7 million for this season alone. By the way, he still gets that money even if he doesn’t play.

Sure, it’s unfortunate that Drummond is unable to play for the Cavs due to these circumstances. However, everyone and their grandma knows that the NBA and professional sports, in general, are a business. Playing in the league requires that understanding from the players.

This is what Warriors PF Draymond Green said in a postgame interview after the game against the Cavs. Via Yahoo: 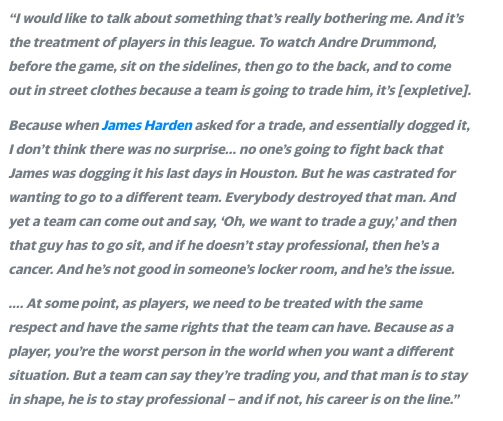 The organization is who writes the checks for these players making more in a year than some people make in a lifetime. Thus, it really is up to them what they do with their players. Let’s say Drummond plays like normal, twists an ankle and is out for a month or two. There goes any type of trade value and the Cavs won’t get anything in return that could help the club in the future. He becomes a free agent at the end of this season.

Moreover, it’s not as if this treatment of players like Drummond is inhumane, inappropriate or physically harmful. It’s literally having the player stay in street clothes and sit on the bench (making those aforementioned millions). Frankly, having to watch these current Cavs is punishment enough.

Why don’t you shut your mouth and worry about your own team?