After today’s disappointing 38-15 loss (with four turnovers) to the New England Patriots, the Cleveland Browns are now 2-4 on the season. Losses versus the Jets, Falcons, Chargers and now the Patriots. Only two wins versus Carolina and Pittsburgh. Unfortunately, it appears like this team has lost its head coach. They don’t seem to be playing with the necessary heart and fire an NFL team needs to win games.

Yes, many fans want the team to ax the defensive coordinator, Joe Woods. He hasn’t been great either and should be fired also. However, look at the offense for today’s game and the man that calls the plays is Stefanski. It was terrible.

Since the team came back in ’99, there have been 12 head coaches and it just feels like no one has been able to figure out how to get this team to win a Super Bowl.

Stefanski, age 40, was named head coach in 2020. In his first year, he actually got the Browns to the playoffs with an 11-5 record. The team lost to the Kansas City Chiefs in the AFC Divisional Playoff Game, but things looked great anyway. The following year, the Browns went 8-9 and did not make the playoffs.

Here was are right after this terrible loss to the Patriots and it’s time. Time to move on from this coach that cannot lead this team anywhere anymore.

Some may argue that our star quarterback DeShaun Watson is out serving his suspension and the team has to rely on backup Jacoby Brissett for this season so far. That isn’t an unfair claim, but it’s much more than that this year. There has been so much questionable play-calling, decision-making and the effort isn’t there either.

Take our beloved Cleveland Guardians baseball team and how they feed off the energy of manager Terry Francona. It’s the complete opposite of this Browns squad. One could argue the Browns have more talent in retrospect compared to the Guardians, it’s just that the coaching is much better for baseball to football this season. 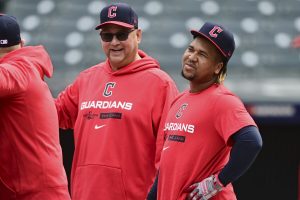 Now, who would the Browns replace Stefanski?

Sean Peyton, the former successful Saints head coach is out there and seems like a good candidate.

There is a very good chance the Browns stay with Stefanski because of the whole Watson deal and past successes. Unfortunately, it doesn’t look like this team is going to get any better when they are losing games to very mediocre opponents such as the Patriots at home.

If Stefanski remains head coach, he will have to win back this locker room and get the guys motivated for the upcoming divisional games against the Ravens and Bengals before the bye week.

Well, we shall see what the front office decides…