This was peak-drama here in Cleveland.

Browns reporter Mary Cay Cabot reported on Monday afternoon that tight end David Njoku wanted to be traded. It’s not the first time Njoku has *allegedly* requested out of being a Brown. This year, however, Njoku doesn’t really have much to show for with only five total catches for 63 yards and one touchdown.

Here is where things got interesting:

It kind of sounds like those famous words by former president Bill Clinton. Just about football…

But then, even more interesting: 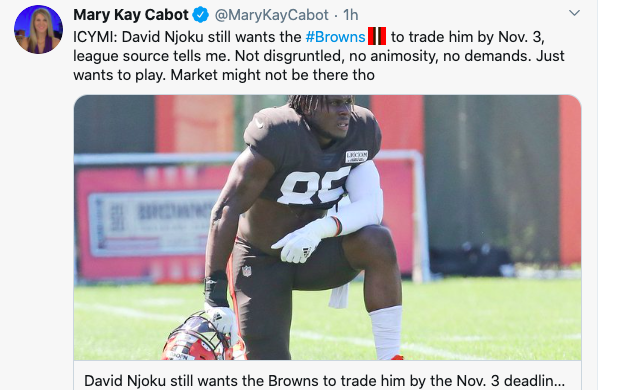 With tight end Austin Hooper getting the majority of the playing time, it would make sense that Njoku wants out of Cleveland. Hooper has 22 catches, 205 yards and a touchdown on the season.

However, in the NFL, it is never a guarantee for any player to make it through the entire year. Just look a running back Nick Chubb’s injury and the fact that backup Kareem Hunt is now starting. Additionally, teams frequently use sets with two tight ends on the field at the same time. Thus, having some depth cannot hurt…

The question now becomes if Njoku actually wants to be traded out of Cleveland or if that was just a rumor circulating around the media. If a Browns player isn’t fully committed to the objectives for this team, he’s not a good influence to have on the roster.

Now, despite a lack of stats for this current season, Njoku has proven that he is capable of playing the position of tight end. If the Browns actually decided to trade him, it could bring back some solid player(s) that will help this team in other areas.

Only time will tell. The NFL trade deadline is November 3.