This photo has been circulating the web from DeShaun Watson’s latest accuser: 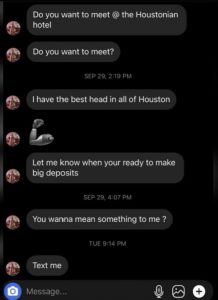 The doesn’t look like any type of innocence to me. I will once again state that I am in no way saying that DeShaun Watson is completely innocent. However, isn’t the saying…

This is my fear with Watson in the coming days/weeks/months. More and more women are going to claim that Watson did things to them in order to get money from him. The classic “Gold Digger.” After all, Watson signed a five-year 230-million-dollar contract with the Cleveland Browns this past offseason. Clearly, he has a lot of money and everyone on the planet knows that fact.

Honestly, it’s a tricky subject to talk about because a person doesn’t want to dispute women who may have actually been sexually assaulted and have legit claims.

This coming from Lawsuit Information Center: “This latest move comes just days after a story in the New York Times which reported that Watson had hired at least 66 different massage therapists (including the 24 plaintiffs in the lawsuits) over 17 months between 2019 and 2021.

This means that there are a plethora of women out there that Watson hired and haven’t made any claims…yet. Certainly, these therapists may have no problems with Watson and will not pursue any type of legal action because of his treatments. That would be good moving forward and allow Watson to come back after this 11-game suspension and play in Week 13 for the Browns against the Texans in Houston.

What if that isn’t the case, though?

What if more and more claims are filed?

What will the NFL do moving forward?

What will the legal action be?

Will Watson get to play this season? In the future?

The questions are endless!

I’ve always said about DeShaun Watson and the contract that the Browns signed him to in that it cannot be judged until he plays after this suspension and beyond. This year may not be a playoff-contending year (2-5 currently), but the coming years could end up being great.

The problem is if those coming years are filled with claims, litigation and more and more legal problems. Unless you or other people were in the room. There isn’t a way to truly know if every single claim is true or if it is the classic “Gold Digging.” Believe what you want. I’m sure Watson did some messed-up stuff. Is it fair to believe every single claim? Can’t be so sure.