A lot of people forget that QB Baker Mayfield sucked last season and that was the reason the Browns sought a quarterback of Deshaun Watson’s caliber. There are rumors circulating that the suspension faced for Watson will be a full season.

The Washington Post reports Deshaun Watson is likely to be suspended for a full year by the NFL. https://t.co/4VNj1a5UDv

Now, let’s play a little Marty McFly and Doc with you all.

The contract the Browns signed Watson for was five years in length. That’s:

Now, my biggest fear that I wrote in a previous article was that the NFL would suspend Watson for life and he would never be allowed to take another snap as a member of the Browns or any team. As time goes on, I don’t believe that will happen.

Here is one of many examples of fans pulling the “Baker” card: 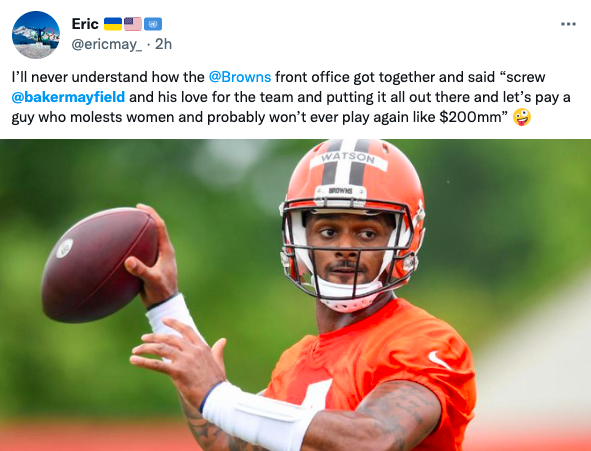 Yeah, that was a fear of mine as well. Even so, we need to be realistic. As much as the NFL loves its PR, it also loves its talent playing on the field. Watson sells tickets, like him or not and that is the bottom line. Thus, a year suspension compared to “ever again”  is much more likely.

Additionally, there is something else we need to consider…

Despite common belief, the Browns aren’t stupid. They knew that a suspension of some sort was and still is very likely. The team made the choice of signing Watson with that idea. The point is that it’s not going to be a surprise. This is completely a long-term plan and not just for this upcoming season.

In addition to Deshaun Watson’s pending suspension, this is what many forget.

Did the man break the law?

No. That was proven in court.

Was his behavior appropriate?

Even so, there is a huge difference between heading to jail and having to pay off a plethora of women.

If Watson gets any type of suspension many fans will pull that “Baker” card. It’s good for the length of the suspension, sure. Yet Watson is going to come back and play football for the Cleveland Browns and when he does it’s going to be a very exciting and fun time to be a fan of the team.

In summation… Sure, this season may not be great if Watson gets a suspension for the entire length. It’s the next four years after that the Browns front office is looking towards.

That is why it is by all means not the end of the world at all for this team.