This article will examine the wide receiver position group for the 2021 Cleveland Browns.

Jarvis Landry: Drafted by Miami in the second round of the 2014 draft, Landry was traded to the Browns on March 9, 2018. His best year as a Brown was 2019 when he caught 83 passes for 1174 yards and six touchdowns. In 2018, Landry recorded his 427th reception and passed Larry Fitzgerald for most receptions for a player in his first five NFL seasons. In 2019, he recorded his 529th reception breaking the record held by DeAndre Hopkins of most receptions in an NFL player’s first six years. In 2020, Landry was most productive in the second quarter of games. He had 25 receptions for 299 yards for a 12.0 average per catch. When the margin of victory was seven points or less (12 games), Landry caught 40 passes for 454 yards for an 11.4 average. 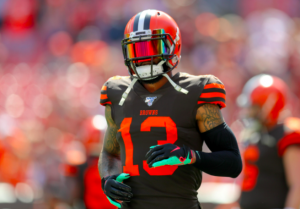 Beckham was selected by the New York Giants in the first round of the 2014 draft. On March 13, 2019, Beckham was traded to the Cleveland Browns. In 2019, Beckham had 74 receptions for 1035 yards and four touchdowns. Beckham’s 2020 season ended after he was injured against the Bengals in Week 7. He was most effective in the first halves of games with 17 receptions for 252 yards, three touchdowns for a 14.8 average per catch. Like Jarvis Landry, Beckham was the most productive in the second quarter with 12 receptions for 171 yards, two touchdowns for a 14.3 average per catch. 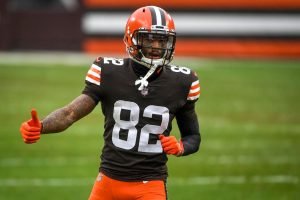 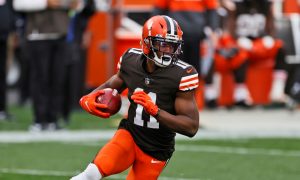 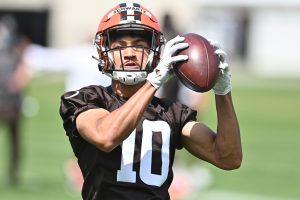 Schwartz was drafted by the Browns in the third round of the 2021 draft. At Auburn University, he excelled at football and track and field. In 2018, at the under 20 world championships, Schwartz finished second in the 100 meters and was part of the winning 4 x 100 relay team. He finished his career at Auburn with 117 receptions for 1433 yards and ranks 10th in career receptions.

A very versatile and deep wide receiver room. It all starts with the health of OBJ. If he’s ready to go, opposing defenses will have to pay attention to him. Landry is the heart and soul of the Browns and makes a habit of clutch catches. Higgins has proven to be one of Baker Mayfield’s favorite targets and Peoples-Jones showed up to camp this year determined to make his mark. Schwartz has the world class speed to contribute and keep opposing defenses off balance.