This article will examine the secondary position group for the 2021 Cleveland Browns.

Drafted by the Browns in the first round (number four overall) in the 2018 draft. For his Browns career he has recorded 138 tackles, 112 solo, 26 assisted with seven interceptions. Ward is one of the top cornerbacks in the league. Pro Football Focus ranks him the eighth-best cornerback heading into 2021. In each of his first three seasons, he’s averaged a PFF coverage grade of at least 72.0. He is in the 96th percentile group in single coverage since 2018. In 2020, Ward played his best in the fourth quarter recording 17 tackles, 16 solo, one assisted and two interceptions. 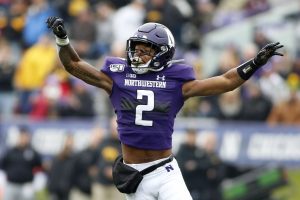 Drafted by the Browns in the first round of the 2021 NFL draft. In his last year at Northwestern University, he allowed a passer rating of 31.7%. He broke up 10 passes, allowed 12 passes, had 12 tackles and one interception in six games. Finished his college career with 25 passes defended. At 6 foot 1, 192 lbs. has the size and length to compete with NFL receivers. Has excellent athletic traits. 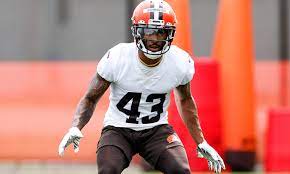 Drafted by the Los Angeles Rams in the third round of the 2017 draft. Signed as a free agent by the Browns on March 17, 2021. For his career, he has recorded 326 tackles, 211 solo, 115 assisted and eight interceptions. He has earned PFF overall and coverage grades of at least 80.0 in every season he’s played. In 2020, he played his best when the Rams were ahead in a game recording 61 tackles, 44 solo and 17 assisted tackles. He was the top free-agent safety available in 2021. 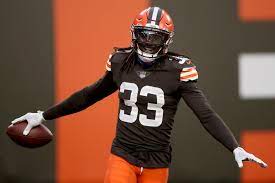 Drafted by the Jacksonville Jaguars in the third round of the 2018 NFL draft. He was traded to the Browns on September 3, 2020. For his career, he has recorded 138 tackles, 89 solo, 49 assisted, four sacks and four interceptions. Ranked as the 30th NFL safety by PFF with an overall grade of 76.6. Last year with the Browns Harrison played his best when the margin of victory was seven points or less (six games) and when the Browns were ahead in a game. In close games, he recorded 25 tackles, 20 solo, five assisted and a sack. When the Browns were ahead Harrison recorded 23 tackles, 18 solo, five assisted and an interception for a touchdown. 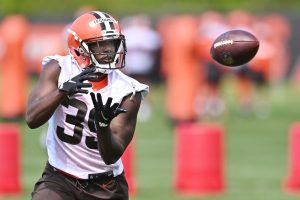 Troy Hill, Greedy Williams, A.J. Green, Grant Delpit, Richard LeCounte, III, M.J. Stewart. Hill was the highest-graded slot defender in 2020 by PFF with an 87.8 grade. Williams has the size (6 foot 2, 183 lbs.) to defend any NFL receiver, but needs to stay healthy. Green played himself onto the roster this year with a great camp. Was highly sort after in 2019 as an undrafted rookie free agent. Delpit will slowly be eased onto the field this year after an Achilles injury during training camp in 2020. He has the potential to be a major part of the Browns defense. Stewart excelled late last season as a cornerback with the Browns. He was asked to learn to play safety this year and has done very well. Leconte also played himself onto the roster with a great pre-season. Prior to an injury in his last year at Georgia, he carried a first-round grade in the upcoming 2021 draft.

If the Browns are going to succeed in 2021, the weight falls on this position group. Last year the Browns secondary missed the most game time in the NFL due to injury or Covid concerns. Due to poor safety play, the middle of the Browns defense was a playground for opposing tight ends, slot receivers and running backs. The free-agent additions of safety John Johnson, III and cornerback Troy Hill, plus more playing time for safety Ronnie Harrison and safety Grant Delpit should propel the Browns secondary into at least the top ten of NFL pass defenses.