This article will examine the running back position group for the 2021 Cleveland Browns. 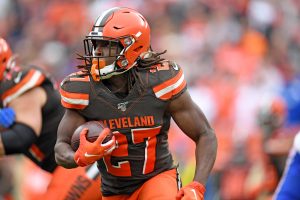 Drafted by the Kansas City Chiefs in 2017, he led the league in rushing that year with 1327 yards. Hunt is the number two punch to the Browns one-two punch rushing attack. In 2020, he rushed for 841 yards on 198 attempts averaging 4.2 yards a carry with six touchdowns. Hunt added 304 yards in receiving on 38 receptions with five touchdowns. Like Chubb, Hunt saves his best for the fourth quarter; 369 yards on 83 attempts for an average of 4.4. In the fourth quarter when the Browns trailed by seven points, Hunt rushed for 162 yards on 26 carries for an average of 6.2 yards per carry. He also has six red zone touchdowns. 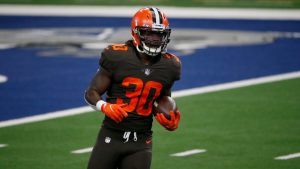 What a strange trip it’s been. Johnson went undrafted in 2018 and spent time in the New Orleans Saints rookie camp. After not being signed, he spent the rest of 2018 working as a mahi mahi fisherman in Key West Florida. In 2019, he played for the Orlando Apollos of the Alliance of American Football, where he rushed for 372 yards. After the AAF ceased operations, he signed with the Browns. His best game in 2020 came in week five versus the Dallas Cowboys, where he rushed for 95 yards on 13 carries. He was also vital on special teams after the bye week; when he returned six kickoffs for 137 yards and ten punts for 63 yards. 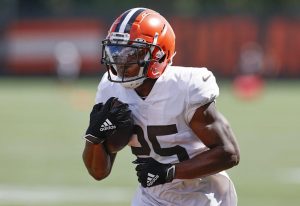 A sixth-round pick in the 2021 NFL draft out of UCLA. He is expected to contribute as a running back, wide receiver and kick returner for the Browns. At UCLA, he rushed for 1101 yards on 233 attempts for an average of 4.7 yards and had 958 yards receiving on 99 catches for an average of 9.7 yards. He had 15 touchdowns. As a punt returner, he had 611 yards on 26 attempts for a 23.5 yard average and one TD. 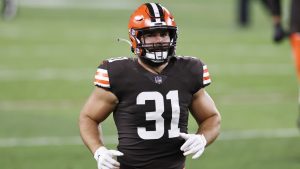 Was a sixth round pick in the 2016 NFL Draft by the Denver Broncos. Janovich is perfect for the wide zone offense as a blocker out of the backfield. He does all the dirty work to help Chubb and Hunt get their yards.

It’s one of the best running back rooms in the NFL. Chubb is a workhorse back that could break a long run at a moments notice and Hunt adds versatility in both the running game and the receiving game, especially in the red zone. Felton could be an explosive weapon in Kevin Stefanski’s offense. Janovich will keep opening holes in the wide zone offense.