This article will examine the offensive line position group for the 2021 Cleveland Browns. 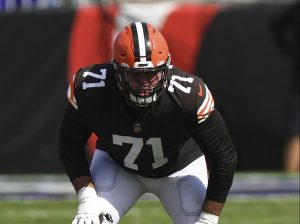 Drafted by the Browns in the first round of the 2020 draft. Played right tackle in college and successfully transitioned to the left side his rookie season. According to Pro Football Focus, Wills overall grade was 62.6 but had a 77.6 pass blocking grade. He allowed 18 pressures in 2020, the lowest of all rookies drafted in 2020. Considered the second-best rookie tackle in a very talented rookie class. 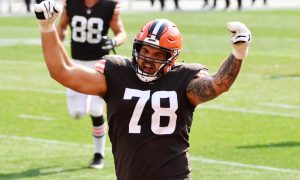 Signed by the Browns as a free agent in 2020. Originally drafted by the Tennessee Titans in the first round of the 2016 NFL Draft. Before playing for the Browns, Conklin never graded in the top-10 of the PFF rankings, usually averaging a 80.0 grade. In 2020, his PFF overall grade was 84.0, with a pass blocking grade of 81.5. PFF graded Conklin as the 12th-best tackle in the league. 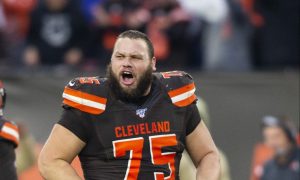 Drafted by the Browns in the second round of the 2014 draft. Was considered the best offensive tackle prospect in that draft. This may be why he’s had an 80.0 plus PFF pass blocking grade every year and an 85.0 plus grade since 2017. In 2020, Bitonio added a career-high 81.5 PFF run blocking grade. Graded as PFF fourth-best guard in the NFL. In 2020, he allowed one sack all year;  the opening game versus Baltimore. 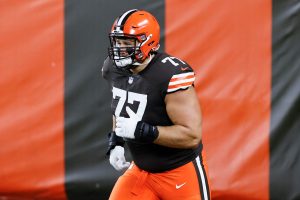 Drafted by the Buffalo Bills in the fifth-round of the 2018 Draft. Traded to the Browns on August 29, 2019. Teller was a question mark heading into the 2020 season. He responded with the highest PFF overall grade of 92.3, the best among NFL Guards. Teller’s PFF run blocking grade was 93.6, while his pass blocking grade was 61.7. He allowed three sacks in 2020. Graded as the ninth-best guard in the NFL by PFF. 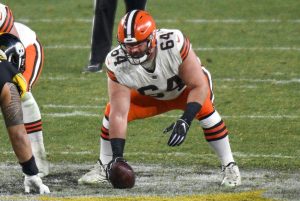 Drafted by the Green Bay Packers in the fourth-round of the 2013 NFL Draft. Signed as a free agent by the Browns in 2017. Tretter is considered one the best centers in the league. Over the past six years has recorded a PFF pass blocking grade of over 80.0. In 2020, he recorded a career-best overall PFF grade (81.0) and PFF run blocking grade (76.5). Graded as the fourth-best center in the NFL by PFF.

G Michael Dunn, G Blake Hance, C Nick Harris, T Chris Hubbard, T James Hudson III. Dunn proved his versatility in the preseason by starting at center against the Giants. Harris can play both guard and center. Hance was signed late last year off the Jacksonville practice squad and met the team in Pittsburgh prior to the kickoff of the wildcard game. With no practice, played and blocked Cam Heyward allowing no sacks or pressures. Hubbard is the first substitution off the bench. Has started at both guard and tackle in the NFL. Hudson is considered perfect for the Browns wide zone offensive line scheme.

As noted earlier, Pro Focus Football graded the Browns offensive line number one in pass blocking and number two in run blocking. The Browns allowed the eighth-fewest sacks in the NFL and had the third-most rushing yards as a team. This position group is so deep that the number two offensive line is better than a few starting offensive lines in the league.