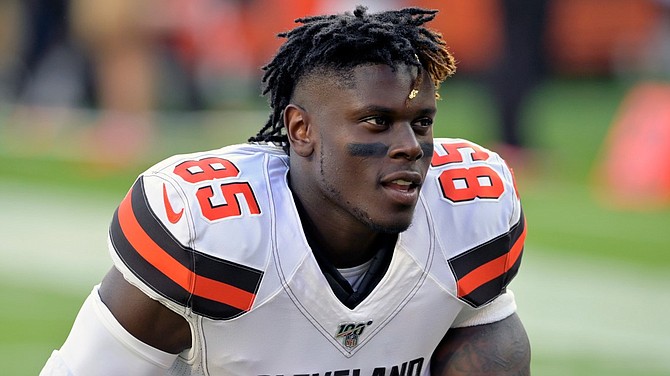 David Njoku, the longest-tenured tight end with the Cleveland Browns has agreed to keep his talents in Cleveland for several more seasons. He and the team have agreed to a very generous four-year deal worth $56.75 million. The deal includes a nice $28 million guaranteed signing bonus. So, the “Chief” as he likes to be referred to, will now become an even more attractive and expensive passing game TE.

The number of talented offensive weapons the Browns have has continued to be very impressive on paper. The real challenge will be how will all these moving parts work together in unison to make Cleveland better than they ever have.

The biggest addition this off-season has been getting Watson. The team has had some of these same talented players in the past, but they weren’t able to go far when former Cleveland quarterback Baker Mayfield was in charge.

Now with Njoku signaling to all that he is here to stay, it’ll be fun to see how these preseason projections pan out.

Njoku is entering his 6th season. He’s only turning 26 in July, so he is entering his prime. He was drafted in the first round of the 2017 NFL Draft. That was an outstanding draft as we think about it now. Browns star defensive end Myles Garrett was drafted No. 1 in that same draft.

The “Chief” had a respectable past season where he caught 36 passes for 475 yards and four touchdowns. It wasn’t his career best. That happened back in 2018 when he grabbed 56 passes for 639 yards.

So, some of the vibe out there in Browns Nation feels this is a pretty steep price tag for a tight end and a player that didn’t even catch 40 passes last year. But most that cheer on their favorite Cleveland team see this as an exciting step in making sure new quarterback Watson has multiple and reliable receivers.

Browns players at this point in the offseason seem genuinely eager to play alongside Watson and though the season is three months away, it’s a better vibe overall than in the past. Players like Njoku signing these deals now are making Cleveland more of a destination than any other time in the past 20 years. Having defensive end Jadeveon Clowney recently re-sign and players like cornerback Denzel Ward and running back Nick Chubb re-sign too in the last year all make the future very bright for the Orange and Brown!