The 3-0 Cleveland Crunch remains undefeated after their 8-4 victory over the Cincinnati Swerve Saturday night.

The Swerve scored the first goal of the game but that did not stop the Crunch from rallying and fighting back to remain victorious. Forward Ryan Minick kicked off scoring for the Crunch, assisted by midfielder Sami Mutemwa, tying the game 1-1. Midfielder Ryan Wikle scored off a pass from Minick to tie the game 2-2 right before halftime.

The Crunch came out hot in the third quarter with back-to-back goals from midfielder Mike Derezic and forward Gabriel Pewu, putting the score at 4-2.

The fourth quarter saw goals from Minick, Pewu, and Mutemwa, who scored his first of the night. Cleveland “crunched” the Swerve 8-4, and Minick earned the MetroHealth ‘Man of the Match’ honor with two goals and one assist.

The Crunch will be back in action at home next weekend, when they take on their Midwest Rivals, the Chicago Mustangs, in back-to-back matches on Saturday, Jan. 29, and Sunday, Jan. 30. Tickets are on sale now and can be purchased at http://theclevelandcrunch.com/tickets. 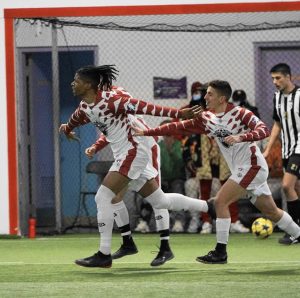 Who Are The Crunch?