After unleashing a bevy of goals on Colorado the evening before, the Crunch cranked up the defense in defeating the visitors, 9-2. Facing the Inferno the day after defeating them 17-6, one could imagine a letdown on the Crunch’s part. The boys in white wanted no part of that mentality as they hounded and harassed their opponents throughout the match.

The offense was still potent as it netted four goals in the first period. Midfielder Mike Derezic opened the scoring with a tight-angled shot from the right, set up by midfielder Admir Suljevic’s intelligent pass. Credit must also be given to defender Boban Cancer whose physical defense ignited the break initially. The defense was all-in from the start as evidenced by captain David Jordan’s sliding tackle to break up an Inferno 2-on-1 break. He paid the price as he left the field in noticeable pain but would later return.

The Inferno picked up a blue card (given for a low-level infraction), giving the Crunch a man advantage. Cleveland was relentless as it pressed for a second goal. Colorado’s goalkeeper Justin Dzuba made a couple of very nice saves but the Crunch were too much as Jordan buried the power-play goal in the back of the net. Soon after, Derezic made it 3-0 with his second goal, a wonderful solo effort. The fourth-and-final goal of the period came via a nice two-man game with Suljevic (assist) and Derezic (goal). With that goal, Derezic picked up his second consecutive hat trick (third if one is counting his preseason hat trick).

The second period was uneventful by comparison. Although the Crunch were still in control, Colorado was playing noticeably better. Both goalkeepers made nice saves, keeping both sides with a zero for the period. Crunch still held a 4-0 lead at the break.

After assisting on a couple of goals in the first half, Suljevic scored one for himself, pushing the Crunch to a 5-0 lead early in the third period. Moments later the lead became six as Derezic scored off a give-and-go with Suljevic. The goal was also a byproduct of a devastating counterattack, which the Crunch made effective use of throughout the match. The Crunch’s seventh goal came courtesy of midfielder Tom Beck, who got in on the scoring as he positioned himself in the middle of the goal box, firing in a pass from Derezic.

After an Inferno foul near their goal box, Suljevic guided the free-kick to Ryan Minick on the right-wing who slammed it home for an 8-0 lead. Later in the third, Jordan picked up his second goal of the afternoon. The quarter ended with the Crunch leading 9-0. Thoughts of a potential shutout followed the home side into the fourth.

Sadly, the Inferno’s goose egg hatched after Francisco Rivas scored the visitor’s first goal. Credit to Marijo Musa who made multiple saves to stymie Colorado in the build-up, but one finally slipped past him. A few moments later, Mirko Petkovic replaced Musa (12 saves) in goal. He was challenged early on, making a big save on Ismael Morales. Later in the period, however, Morales got the better of Petkovic from the left-wing. The consolation goal made it 9-2, which is where the game ended.

Suljevic picked up the Man of the Match on the strength of his goal and four assists. Derezic finished the game with four goals giving him seven to start the season. Musa was great in goal and the defense put on a masterclass in pressing and defending. A noticeable difference between the two sides was the levels of communication on defense with the Crunch continually talking to each other while Colorado was relatively silent. However, special mention should be made of the Inferno’s Dzuba whose efforts prevented the Crunch from putting up another 10 or so goals.

The Crunch are off to a great start this season. They appear ready to make their presence felt in M2. The hunger for success was plain for all to see this weekend. Fans hope that this momentum carries the team into its next match against the Muskegon Risers on 4/3. 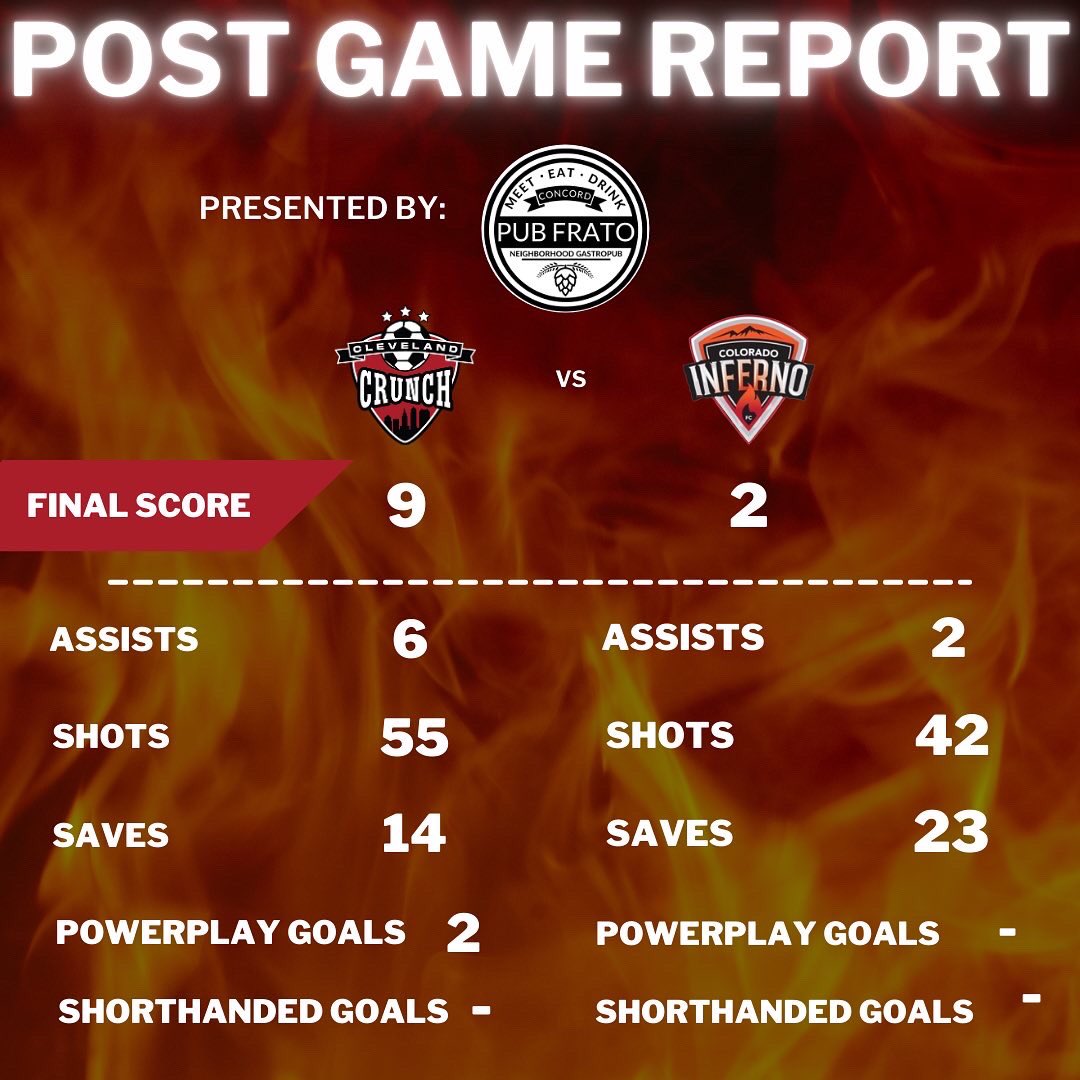 *Image used with the permission of the Cleveland Crunch.