That’s what SS Francisco Lindor and the Cleveland Indians have done with their contract talks. Now, if we take the positive first and realize that Lindor can now simply focus on baseball, well, that’s a good part…for this year. However, it makes the future seem bleak. Many believe Lindor may eventually end up on another team instead of staying in Cleveland as his career goes on.

Take a look at why fears are so high: 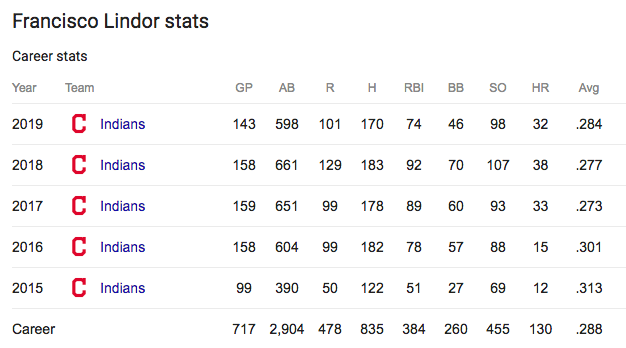 Lindor will make $17.5 million (arbitration) for this season alone. Then, the star becomes an unrestricted free agent and is able to sign with any team in the league. According to USA Today, the Indians have the 16th lowest total team payroll.

Obviously, it’s no secret that another team would be willing to offer Lindor a massive contract for him to become a part of their team. The Indians owners are notorious for being cheap and it would be a huge move for them to keep Lindor in Cleveland with a giant new contract.

Now, here’s something that is relatively obvious and that is the monetary value Lindor brings to the Tribe.

Lindor helps the Indians be a better team, potentially making the playoffs and it leads to more advertising opportunities and seats sold through the year and playoffs.

In summation, sure, what the team is going to have to pay Lindor if they want to keep him in a Tribe uniform is an extremely large sum of money. However, it could be looked at as an investment in the aforementioned ways listed above.

Plus, simply take another look at that box.

I don’t have to tell fans how great a player Francisco Lindor is, both at the plate and fielding, too. Losing a guy like that would be so demoralizing to this franchise that is used to losing stars because of money. There is the certainty that I and many other Tribe fans would shed tears if Lindor signed with another team.

Let’s fast-forward to after this season is over. Hopefully, it’s a World Series for Cleveland.

Unless Lindor has a horrific year (which is doubtful) or gets hurt for the majority of the season (again, unlikely), he is going to draw a ton of interest for that huge price tag. The problem with the Indians is that it becomes almost a level playing field. Other squads such as those listed above will joust for the star player to don its team’s uniform for many years.

Did the Indians miss the chance?

Now, if the Tribe and Yankees both offer seven years, 300 million and those are the top offers. It would make sense for Frankie to stay in Cleveland because it’s where his whole career has been. However, getting the Indians to commit to 300 million when if the owners saw a penny on the ground, they’d dive after it, is unlikely.

That is why I believe Francisco Lindor will be on a different team come 2021. For the first time in my life, I hope I am wrong. Try to focus and enjoy this season and this season alone. Sadly, it all may go downhill after it ends.

On this day in Cleveland sports history… 4/8/20

Is Kevin Stefanski the answer the Browns are looking for?