Due to Covid-19, the AHL had to realign their divisions and what the schedules would look like. As a result, Cleveland got placed into the Central Division with some old divisional friends from when Cleveland was in the Western Conference. These friends were the Chicago Wolves, Grand Rapids Griffins, Iowa Wild, Rockford IceHogs and Texas Stars. Interestingly, the Monsters and Wild didn’t play each other at all during the season. Instead, the Monsters played a geographic rival in the Rochester Americans.

The Monsters’ season wrapped up on Saturday, May 15 at Van Andel Arena in Grand Rapids, Michigan with a 4-1 loss to the Griffins. As a result, the Monsters finished their season with a record of 16-10-1-2 and 35 points. That was good enough for second place in the temporary Central Division. However, we’ll never know if that was good enough for the team to qualify for the Calder Cup Playoffs or not because the AHL canceled the playoffs for the second straight years. This means that for the third straight year, the Charlotte Checkers (now the affiliate of the Florida Panthers), are the defending Calder Cup champions even though they won it in 2019.

Normally, the Monsters are in the North Division in the Eastern Conference with the Belleville Senators (Ottawa Senators affiliate), Rochester Americans (Buffalo Sabres affiliate), Utica Comets (now the affiliate of the New Jersey Devils), Binghamton Devils (who no longer exist), Syracuse Crunch (Tampa Bay Lightning affiliate), Laval Rocket (Montréal Canadiens affiliate) and the Toronto Marlies. Hopefully, next season Cleveland will be back in their normal division. Under normal conditions, the Monsters would also play teams outside of their division like the Hershey Bears (Washington Capitals affiliate and the team the Monsters defeated in the 2016 Calder Cup Finals), Charlotte Checkers, Wilkes-Barre/Scranton Penguins (Pittsburgh Penguins affiliate) and Lehigh Valley Phantoms (Philadelphia Flyers affiliate).

Going into the weekend of April 24, the Monsters had a very special opportunity to capture at least one win at Rocket Mortgage FieldHouse against every opponent on their schedule (Click here to read my article about this topic). Thanks to a pair of victories against the Chicago Wolves, 5-4 in overtime on April 24 and 4-2 on April 25, Cleveland was able to accomplish the goal of getting a victory against every opponent on their schedule at least once at RMFH.

As an extension of Cleveland Sports Talk, I also run a Cleveland Monsters Twitter page (@TalkMonsters). Since the season is over, I decided to send out a tweet to every team that the Monsters played this season to thank them for a great season full of fantastic matchups. Look at who liked the Tweet, the Chicago Wolves! 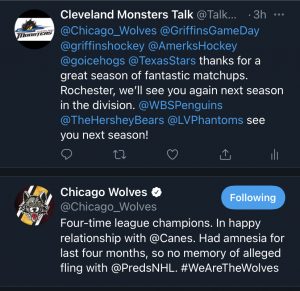 Here's why Cavs fans should be thanking the Warriors! MORE:
http://clesportstalk.com/a-thank-you-to-golden-state