According to ESPN Cleveland reporter Brad Stainbrook, Herb Miller will sign back to practice squad if he clears waivers.

Awesome reaction from the family of Thomas Graham Jr when they found out he is a Chicago Bear.

The 23-year-old CB was a fan favorite on the Chicago Bears until an injury occurred during training camp that shortly after prevented Graham from playing in preseason, being waived yet maintaining on the team’s practice squad.

The former Oregon Duck was drafted in the 2020 NFL Draft during the 6th round at 228th overall by the Chicago Bears franchise.

Chicago Bears CB Thomas Graham Jr. had one of the best rookie debuts of 2021 on MNF:

Smart, balanced and plays the catch point really well. Should've gone waaaay earlier than Round 6 in the draft. pic.twitter.com/wZPisS8Z5j

Thomas Graham made his NFL debut on December 20 for Monday Night Football against the Minnesota Vikings, playmaking on seven tackles and three pass breakups, now the Cleveland Browns is his next destination to continue his NFL career. 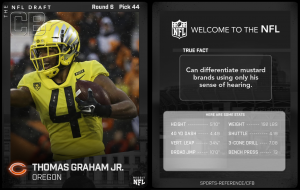