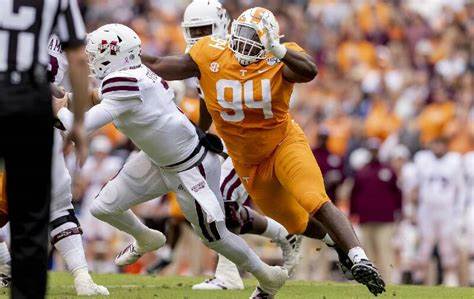 The Browns go back to filling the wide receiver room as they select Doubs who had a great career in Nevada. He finished with 3322 yards and 26 touchdowns. In the last two seasons, he went over 1000 yards receiving. He also collected 225 passes in his time with the Wolfpack. Doubs has great hands and stands at 6’2 and he’s fast. He can separate from the cornerbacks easily and has the skill to get open on the deep routes.

I absolutely love Butler. Put on the tape and be ready to be impressed. He stands at 6’4 and just under 300 pounds. He went for 152 tackles including 16 for losses. He also added 9.5 sacks. He has excellent lateral quickness and can fill gaps in the rush. His first step to getting into the backfield is also very good. The Browns certainly need some help along the line and Butler would be able to contribute right away.

The Cleveland offensive line needs help next season. A former center, JC Tretter was released and the depth on the line is weak. Last season, the Browns were always trying to plug gaps in the line. Ezeudu will help with that issue. He’s a very versatile player having played every position on the offensive line while in college. He’s considered a high-character kid and very coachable. If the Browns draft him here he’ll be able to work his way into a starting role.

He stands at 6’4 and weighs 310 pounds. He’s a great blocker with excellent hands and length and can keep his opponents away from the quarterback.