THE AFC North is a division known for some of the best rushing teams in the NFL. In 2019, the Ravens set a new league record for team rushing yardage in a season. The Steelers have often had a strong running game and the Bengals are also effective on the ground when they are good. The Browns have recently reestablished themselves as a strong running team, much needed to compete in this division.

Last season, the AFC North produced the 2nd, 3rd and 4th ranked rushers in the league. The Browns Nick Chubb posted 1,259 yards, followed by the Bengals Joe Mixon with 1,205, then the Steelers Najee Harris with 1,200.

Chubb paired up with a healthy Kareem Hunt and D’Ernest Johnson more than ably filling in for either one, makes up one of the best RB tandems currently in the league. Hunt’s 4.9-yard average per carry in limited action last year was the worst of the three.

Thinking of this made me wonder how this group stacked with some of the other outstanding running back groups the Browns have had over their history. Here’s my take on the top running back tandems in Cleveland history. 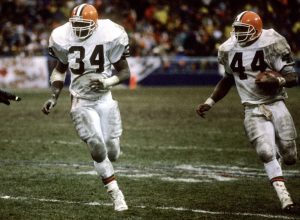 I know, I know, the first thing you think of when you see Byner’s name is “The Fumble,” but his career was about so much more than that. Remember, he had put the Browns on his back and carried them to a great comeback in that 1987 AFC Championship game and was also a strong dual-threat runner/receiver despite not having great speed.

Mack was an excellent blocker and was known as “Mack Truck” because of his size (he played around 235 pounds) and strength. He was more of a compliment to Byner except during the 1985 season when both he and Byner ran for over 1,000 yards. They were only the third duo on the same team to do so at that point. Mack was named the AFC Rookie of the Year that season. He bounced back from jail time for cocaine usage in 1989 and had a solid finish to his career.

I expected to rank these two higher, but after 1985 their numbers dropped off. Along with QB Bernie Kosar, though, they were part of the heart and soul of “Marty Ball,” the grinding style preferred by then Head Coach Marty Schottenheimer. 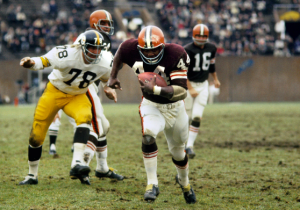 Kelly had the unenviable task of replacing Jim Brown (more on him in a bit) in 1966 after seeing spot duty in the backfield and becoming a dynamic kick returner. Kelly, while no Jim Brown (who is?) made his own name and earned a spot alongside Brown in the Hall of Fame. He gained over 1,000 yards three straight years when that was a big deal, leading the league in 1967 and 1968. Kelly was not nearly as big or strong as Brown, but he was fast and elusive.

Green served as primarily a blocking back for Brown when he broke in and got to share the ball more when Kelly took over. Known as a punishing blocker, Green produced almost 1,500 yards combined in 1966 and 1967, averaging over five yards per carry.

Chubb is a stud and clearly one of the best runners in the NFL. He has averaged over five yards per carry in each of his first four seasons but has already missed 14 games. He is an explosive, powerful runner on a path to becoming one of the all-time great running backs if he can stay healthy.

Hunt has never matched the 1,327 yards he gained as a rookie in 2017 with Kansas City and he has also had some trouble staying on the field, including an eight-game suspension for violation of the league’s personal conduct policy. He is always a breakaway threat and a dynamic second option to Chubb.

Johnson’s 4.8 40-yard dash time at his pro day in 2018 ensured he would not get drafted, but he hooked on with the Browns in 2019 and took advantage of the opportunity to fill in for the injured Hunt last year. He’s not fast but he is quick through a hole and an excellent third option for the Browns. 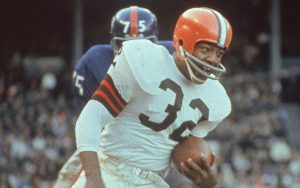 Honestly, I could have lined up next to Jim Brown and still made it the #1 running back tandem in Browns history-Brown was THAT good (I wasn’t). I’m not quite old enough to remember watching Brown play, but I’ve seen plenty of film and it doesn’t lie. Jim Brown is simply the best running back the NFL has seen and likely ever will. That is no slight to Emmitt Smith, Walter Payton, Barry Sanders, O.J. Simpson, etc. The fact that he played fullback gives an inkling of how different the modern game is from Brown’s time from 1957 to 1965.

You don’t often see two future Hall of Famers line up in the same backfield, but that’s what Cleveland had when Mitchell was Brown’s running mate from 1958-to 1961. Mitchell showed his true greatness mostly after he was traded to Washington in the ill-fated deal for Heisman winner Ernie Davis. Mitchell was a fast runner with plenty of moves, but Brown liked him because he didn’t demand the ball much, not that it would have mattered.

Jim Brown remains the only qualifying running back to average 100 yards per game for his career. Wow.

It was quite a gap between Byner/Mack and Chubb/Hunt/Johnson. Now they need to stay healthy…and signed. Hunt and Johnson will be unrestricted free agents after this season. Chubb is signed through 2024. Let’s see how they fare in 2022.

FOR MORE ON BAKER MAYFIELD AND DESHAUN WATSON CLICK HERE