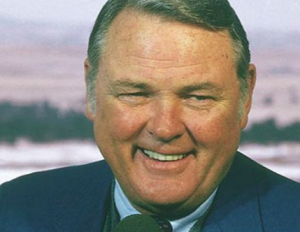 “Whoa Nellie! Touchdown!, FUM-BLE!, and “Hold the Phonnnnne” (said during plays with a penalty) are the only phrases you needed to hear when the great Keith Jackson was calling a college football game. Keith is credited with nicknaming the Rose Bowl “The Granddaddy of Them All” and calling Michigan stadium “The Big House.” He also was the very first commentator in the first season of ABC’s Monday Night Football in 1970. You can also hear his voice on the Super Nintendo video game for Monday Night football. His calls are too many to name, but the one that stood out for me was the 2003 BCS title game between the Hurricanes and Buckeyes which the Buckeyes would win in overtime. Keith Jackson would pass away at the age of 89 in 2018, but his voice and calls are legendary and hold up through time even now.

Kyrie Irving: Why The Nets/NBA is Wrong Too