His nickname was “Trainstopper” at West Virginia if that gives you an idea about his abilities to tackle and play the linebacker spot. Fields played at Arizona for three seasons before playing his final year of eligibility at West Virginia as a graduate school student. He has been described also as a carbon copy to Notre Dame player Koramoah that the Browns already drafted. He has excellent instincts and a nose for finding the ball. Will give Browns veterans, like linebacker Mack Wilson, some competition during training camp. 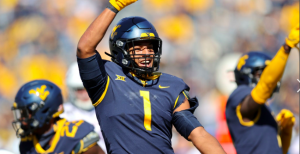