The Cleveland Browns went into M&T Bank Stadium in Baltimore and unfortunately lost to the Ravens by a score of 23-20. This pushed The Dawg’s record to 2-5 and in last place in the AFC North with a matchup against the Cincinnati Bengals (4-3) upcoming on Monday Night Football (Halloween).

However, there was what we fans like to call a lot of “Bullshit.” Usually, it’s mistakes made by our own team. Certainly, there were a few of those in this game. Despite the usual mistakes, the calls by the refs in this game were absolutely catastrophic. In this piece, we will go through all the terrible calls/workings of the refs.

Browns quarterback Jacoby Brissett lofted a pass down the right side to wide receiver Amari Cooper. It was caught and he was in for a touchdown after a few steps (photo above). However, the play was called off after an absolutely weak pass interference call with Cooper using his left arm to “push” “off.” cornerback Marcus Peters. The two players were battling for position and there shouldn’t have been a flag thrown, especially on such a crucial play late in the game.

Roughing The Passer No-Call on Brissett 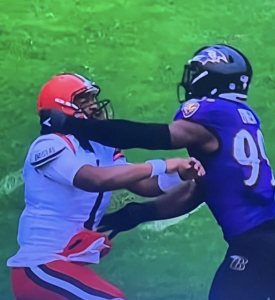 Jacoby Brissett was clearly hit to the ground well after throwing a pass and there was no roughing the passer called on the Ravens. It’s Odafe Oweh that wraps his hand around the facemask of Brissett and brings him to the ground.

That would’ve been 15 yards on the play for the Browns.

The False Start on the Cade York Kick To Tie

Browns kicker Cade York was attempting a field goal from the Baltimore 37-yard line with 2:09 left. The Browns apparently made a false start penalty pushing them back five more yards. No one on the Browns line moved. The “holder” is allowed to move his head to see where to, well, snap the ball to… Other than that, it was the Ravens line that jumped and the penalty should’ve been on them.

The Browns actually should’ve gotten a kick attempt five yards CLOSER. Thus, instead of what ended up being a 60-yard kick should’ve been a 50-yard kick. There’s no way to know for sure, but York probably would’ve made that one…

The Clock Ticking After The Blocked Kick 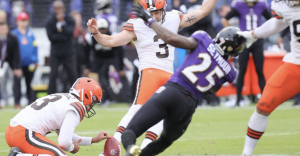 The 60-yard kick was blocked. There’s 2:09 on the clock when the play begins and it ticks down all the way to 1:59. 10 seconds, no big deal…right? Well, this is crucial because the clock went under two minutes in the 4th quarter. Thus, a “timeout” is erased which the Browns could’ve used in the two-minute warning. In reality, there should’ve been 2:05 left on the clock. The Ravens should’ve had to run a play before the two-minute warning. They didn’t due to poor clock management by the crew.

Usually, I would say that it’s crucial to not let the refs decide a game for you. This game was definitely decided by the refs and it’s unfortunate that a league so prestigious as the NFL would let a game be officiated so poorly. The Browns now find themselves in a huge hole and it’s going to be a tough climb to get back in this playoff race.