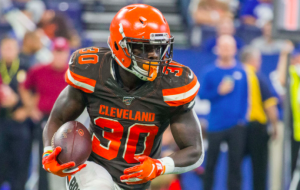 Despite the Jets winning their first game of the season, they are still the Jets. Higgins Mayfield and the rest of the Cleveland passing attack should have a day, but the Browns are still going to run the ball first and foremost. If this game turns out the way most fans think that it will, the Browns will run the ball often in the second half to run out the clock. If they are up big, it would not be surprising for D’Ernest Johnson to get on the field. Johnson has not done much on the ground since his 13 carry, 95-yard outing in Dallas Week Four. On the season, Johnson has 33 carries for 166 yards, which is over five yards per carry. He had four carries last week against the Giants.