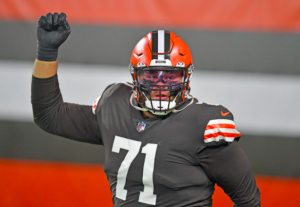 The Browns offensive line has been a big reason why Cleveland is looking for its first playoff appearance since 2002. On Monday night, the Browns did not allow a single sack against a stout Baltimore front seven. Rookie OT Jedrick Wills Jr. has proven time and time again why he was selected in the top-10 of the NFL Draft and last game was no different. The Giants have some talent on the defensive line with DT Dexter Lawrence and DE Leonard Williams. Wills Jr. will look to keep the streak going of QB Baker Mayfield having time to throw the ball. If Wills Jr. does his job there early, it is a real possibility that the Browns can run the ball and close out the game early.