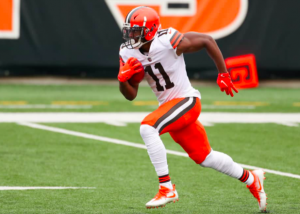 Donovan Peoples-Jones has become the deep threat in this offense. Jarvis Landry has been the most productive wide receiver since WR Odell Beckham Jr. left with an injury, but Peoples-Jones has debatably been the more exciting option in the offense due to his big play ability. Last week against the Ravens talented secondary, Peoples-Jones had three receptions for 74 yards and caught a two-point conversion. In that game, WR Rashard Higgins struggled. He fumbled the ball twice on the opening drive against Baltimore, even though the Browns luckily retained possession both times. Higgins finished with a solid stat line, but his ball security was a concern. Even his touchdown reception was not a clean catch. Because of this, Peoples-Jones could see more work. The Giants have a talented secondary, but that should not be a problem for Peoples-Jones since he put up 74 yards against a better Baltimore secondary.