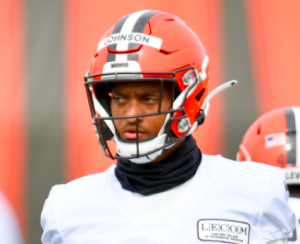 As if losing DE Myles Garrett was not enough for the Browns, CB Denzel Ward will now most likely miss several weeks with a calf strain. CB Terrance Mitchell has played great this season on the other side of Ward, but it will likely be CB Kevin Johnson that needs to step up in this one. Johnson, a former first-round pick, has 24 total tackles, 0.5 sacks and one pass breakup in eight games this season. The Jaguars passing game has not been great this year, but it is not because of the wide receivers. DJ Chark, Keelan Cole and Chris Conley are all talented receivers who can break a big play anytime they get the ball. Glennon has a strong arm, so he will try to sling it to Chark, Cole and Conley. Johnson will need to play well in his third start of the season to ensure that the Jacksonville wide receivers get held in check.