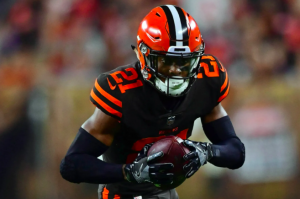 Few players will be more hungry and ready to go in this game than CB Denzel Ward. Kareem Hunt might be the only one more ready to go for Sunday in Cleveland’s locker room. Earlier this week, Ward was activated from the COVID-19/Reserve list. He has missed the last two games and could not have returned at a better time. The Cleveland defense needs their secondary at full strength against Kansas City’s offense, and both Ward and Kevin Johnson are returning to the action this weekend. The Chiefs are known for their big plays, so Ward and the rest of the defense will need to stay disciplined and limit those. The Chiefs run a lot of play-action, which bodes well for the Cleveland defense, as they have been pretty successful against play-action plays this year. Mahomes does not throw a lot of interceptions (only six all year). However, he has thrown four of those in his last three games, and the Browns are coming off of a four-interception game. If Ward and the Cleveland secondary can limit the big plays and force a few turnovers, they might just have enough offensive firepower to get Cleveland to their first AFC Championship Game since 1989.