It wasn’t the cleanest win by any means, but the Browns managed to get the job done at home for the first time this season. With a quick turnaround to Thursday Night Football, the Browns will have a short week to prepare, but they at least have a little momentum finally going. While Baker hasn’t exactly been lighting it up and the offense is still immensely bad in the red zone, the offense, mainly Baker, has been much more efficient and effective lately. There’s still a long way to go to fulfill this offense’s potential, but last week was the best it’s been all season, especially when RB Kareem Hunt was involved.

Maybe the Browns can finally establish an identity with their two-headed monster in the backfield leading the way to open up the field for the rest of the offense. The team still needs to be more collectively disciplined and the play calling and game management is still well below average, but the Browns have a real chance to go on a run if they can beat the rival Pittsburgh Steelers.

To start off the game, the Browns finally compiled a great drive that lead all the way to a touchdown. Perhaps it was because the end zone stripes were finally changed back to vertical instead of horizontal. RB Nick Chubb had a beautiful 21-yard run to get the Browns rolling and then WR Jarvis Landry took over. Over the next four plays, Baker was a perfect 4-4 with a touchdown. Three of those connections were with Landry for 12, 18 and 17 yards respectively with the last being a touchdown grab to open the scoring. The only real blemish on this one was that Landry got a little bit chippy early on and he was called for taunting after the touchdown making the extra point much harder for the rookie K Austin Seibert. After a missed extra point, the Browns lead 6-0 early in the game.

The Bills took a shot on the first play just like the Browns did and CB Denzel Ward was flagged for a 35-yard pass interference penalty. After that, the defense tightened up and forced a turnover-on-downs in no man’s land to get the ball back. The offense continued to roll as Nick Chubb had two nice runs for eight and 24 yards and TE Demetrius Harris caught two passes picking up crucial first downs for 12 and 16 yards. It seemed like the Browns could move the ball at will as long as they weren’t on the goal line trying to score. This game might not have been very close, but the Browns couldn’t buy a touchdown, or even a yard, when they got in close. WR Odell Beckham Jr. drew two pass interference penalties giving the Browns plenty of opportunities, but they couldn’t get a good push up front to save their lives as Nick Chubb had five runs for -2 yards finally resulting in a turnover on downs. The good news is that the defense continued to apply the pressure as they forced a quick three-and-out. After fumbling the punt return, RB Dontrell Hilliard was able to fall on the ball to keep possession. The Browns didn’t do much this time, though, as they had a three-and-out of their own and punted the ball away to begin the second quarter.

This time, the Bills were able to answer with their own touchdown drive. RBs Devin Singletary and Frank Gore along with QB Josh Allen orchestrated a nice drive opening with a run from each of them of nine, three and 12 yards respectively. Singletary then got eight more on his next carry, which was followed up by Allen connecting for two-straight first downs of 12 and 20 yards. After a short Gore run, Allen escaped up the middle for an easy rushing touchdown. The Browns didn’t account for Allen, so he had a free lane right in front of him to walk into pay dirt to take the 7-6 lead following the extra point.

The Browns needed an answer and they marched all the way down the field once again. Nick Chubb lead the way with four carries for 32 yards as Kareem Hunt threw several great blocks and even had a nice nine-yard run of his own. Baker completed three more passes to Landry for 17 yards and he finally found Odell for a 16-yard pickup. Unfortunately, their goal line woes continued as they were held to a field goal from the eight to make it 9-6 Cleveland after being as close as the one-yard line. 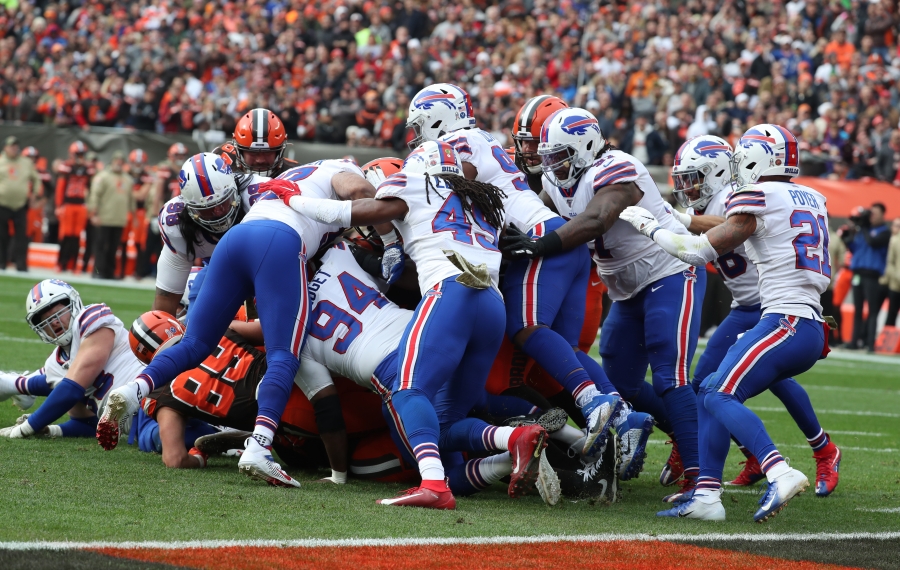 Even though the defense gave up a lot of yards through the air against the Bills next possession, they were manage to hold the team to zero points with a little help. Allen started the drive off 5-7 for 68 yards, but three-straight incompletions stalled the drive forcing the Bills to kick the 34-yard field goal. K Steven Hauschka missed the relatively short attempt wide for the Browns to hang onto the lead with only a few seconds left in the half. After three running plays, the Browns entered the half leading 9-7 over the Bills in what probably should have been a much bigger lead for Cleveland if they could finish drives.

To open the half, the Bills seemed to have something going registering to first downs while establishing a run game, but the drive ended with a 3rd down sack by DE Chad Thomas to force the Bills to punt from midfield. With Cleveland being Cleveland, backed up inside their own 10 at the eight, there was reason to be worried. The offensive line is bad and they throw downfield, so their plays take a while to develop, which isn’t a good thing when the team is close to their own end zone. Baker was sacked by LB Tremaine Edmunds on the first play for a safety that tied the game at nine a piece.

The Bills got the ball back after the safety and they immediately were flagged for two penalties leading to a 1st & 25. While they almost managed to move the chains, the penalties put them in too much of a hole, so they were forced to punt. Following a short Chubb run and an offsides penalty, Baker completed his next four passes for 44 yards with two of them going to OBJ for 10 and 14-yard first downs. However, the drive stalled with Baker throwing two incompletions, so the Browns settled for a 47-yard field goal to go back up 12-9 with a couple minutes left in the third.

As the Bills attempted to respond, they got a little help from a DT Larry Ogunjobi roughing the passer to push them across midfield. However, the Browns defense stood tall holding the Bills to a 4th & four in no man’s land. The Browns were able to get the crucial fourth down stop to end the quarter with the lead. Unfortunately, the offense wasn’t able to generate anything and they punted away inside the 20 to the 16 after a quick three-and-out. After connecting with WR John Brown for a 17-yard hookup, the Bills stalled around midfield once again and were forced to punt the ball right back to the Cleveland 15 yard line. Following a 12-yard catch by Landry and a six-yard run by Chubb, the drive was off to a promising start. However, LB Matt Milano ended it with a nine-yard sack on third down to force Cleveland to punt yet again.

Knowing Cleveland, there has to be at least a little bit of drama in the game that makes fans want to pull their hair out. The Browns gave up two big passing plays of 21 and 26 yards out of the gate to put the Bills in the red zone at the Cleveland 11 already. The defense clamped down though as the Bills gained no yards on the next two plays. On 3rd & 10, Allen scrambled up the middle and fumbled the ball after taking a hit just for his lineman, Jon Feliciano, to pick it up and nearly score. From the one, the Bills had 1st & goal, and the Browns couldn’t hold as Josh Allen ran for his second touchdown of the day to take a 16-12 Bills lead after the extra point with just over five minutes remaining.

The Browns and the city of Cleveland were desperate for an answer. After a short pass to Hunt, Mayfield found OBJ for a 13-yard first down. Following another short pass to Hunt, the Browns messed up a timing play on a forward pitch to Hunt that was returned for a Bills touchdown. Luckily, the play was ruled correctly as an incomplete pass, so the Browns were able to narrowly avoid total disaster. Next, Baker found Hunt yet again who made a nice grab on a beautifully thrown out route for the first down. Then, Nick Chubb had another long run breaking this one for 21 yards and another Cleveland first down. With the game on the line and the Browns driving, Baker looked like he was feeling dangerous. He completed a short pass to OBJ followed by a 24-yard hookup with Landry and then he was even able to score a touchdown from inside the 10 yard line.

WR Rashard Higgins, who has seen randomly decreased playing time after he came back from his knee injury, finally got into the game at the perfect time. Higgins “juked the defender out of his shoes” and Baker found him in the end zone for the seven-yard score to go up 19-16 after the extra point with only 1:44 left in the game.

Josh Allen surprisingly leads the league in game-winning drives and he had another opportunity to do it against Cleveland with a successful two-minute drill. After two plays for only two yards, Allen competed back-to-back passes for 21 and 11 yards to quickly move across midfield. All the Bills could muster was one more six-yard completion and they had to settle for a field goal with 22 seconds remaining. Hauschka missed again, this time from 53, to give the Browns a much-needed victory in front of the home crowd.

While it wasn’t the prettiest game, the Browns got it done to improve to 3-6 on the season. The Browns need to improve in the areas they’ve continued to lack all season and Freddie Kitchens must do a better job managing timeouts and play calling. If they can clean some of their mistakes up and defeat Pittsburgh on Thursday Night Football, the Browns could really go on a run.

Myles Garrett said he wants to get to 10-6, but I just want to see major improvements, which should lead to a lot of wins down the stretch anyway. Taking down the Steelers in a primetime home game would send the city into a frenzy and it would give the Browns some leverage and a ton of momentum for the second half. The Browns need to rely on RBs Nick Chubb and Kareem Hunt to open the rest of the offense and they need to try to force the young QB Mason Rudolph into making mistakes. We’ll see if the Browns are up to the task against their biggest rival in their biggest game of the year so far.