Despite the fact that the Buffalo Bills lost to the Minnesota Vikings last week in overtime, 33-30, they’re still 6-3 overall on the season. Yeah, that’s compared to a 3-6 Browns team that is in complete shambles after their 39-17 loss to the Miami Dolphins on Sunday.

Many were clinging to the hope of a massive snowstorm causing the conditions for the affair against the Bills to actually give the Browns the advantage. It would’ve become a running game battle and quarterback Josh Allen wouldn’t have been able to throw like he usually does on a week-to-week basis.

With the game being moved to Ford Field in Detroit, it gives the Bills the advantage that they would’ve had if the conditions in Buffalo were normal. Sure, the game may have a few more Browns fans in the stands since it’s closer to Cleveland now, but that’s about it.

Honestly, I was looking forward to the snowstorm battle. It would’ve reminded me of the 2007 battle that was actually a Browns/Bills game in Cleveland filled with snow. They played that one where it was scheduled and the Browns won 8-0. 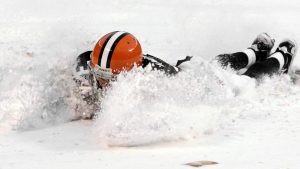 I get why the NFL decided to move the game and it’s not because of the football itself. It’s the fact that people have to commute to the game and back home in those conditions and it’s frankly very unsafe and could cause a lot of problems.

It’s unlikely the Browns will stay close in this one and the team is going to have to find a way to battle with these Bills if they want any chance of winning this one.

Interestingly enough, the Bills will now play two games in a row at Ford Field in Detroit in a matter of days. This one against the Browns and then a matchup against the Detroit Lions on Thanksgiving a week from today. Better make those hotel reservations.

What can the Browns do to actually have a shot to win?

Not only to gain early momentum but to maintain said momentum.

Detroit or Buffalo, snow or sunshine; it’s still a football game. While it’s a long shot, maybe the Browns can surprise us all and win on this neutral site. That would be a thrilling game for sure.

My score prediction is 35-13 Buffalo. It’s hard to have any type of hope these days.