When you’re a kid in your backyard growing up, throwing the winning touchdown pass or being on the receiving end of that throw is a dream come true for most. My Browns superheroes were always QB Brian Sipe or QB Bernie Kosar. They helped lead the Browns teams of old to decades of great football. Their fans and many youngsters like myself always wanted to be just like them! And even those greats of the past didn’t do what Baker Mayfield did this past Sunday in the Browns big win over the Cincinnati Bengals. Mayfield ended up throwing for five touchdown passes, with the last one happening on a historic last offensive drive that culminated in the game-winner, a back-shoulder fade to Browns rookie Donovan Peoples-Jones to snatch a huge win and help the Browns improve to 5-2.

Kosar, in his career, never threw five touchdown passes in a single game. Brian Sipe only threw one five touchdown game back in October of 1979 against the Pittsburgh Steelers. A Browns loss, 51-35. The only other Browns quarterback to throw for five touchdowns in a single game was Kelly Holcomb in 2004 when he got caught up in a track meet with the Bengals and lost, 58-48. That was the last game for then-Browns head coach Butch Davis.

The significance of what Browns fans witnessed earlier this week with Mayfield’s tremendous efforts can’t be overlooked. And what he and his teammates showcased in that last drive will likely be talked about for generations to come. Let’s look at that last drive for a moment and see how those last five offensive plays exuded everything that is changing for this rising team in the NFL.

With 1:06 left, Mayfield and the Browns started the game-winning drive from their own 25-yard line. On 1st down, Mayfield scanned the field. As the Bengals blitzed their one defensive back, Mackenzie Alexander, Alexander was actually able to wrap Mayfield’s legs up. Somehow, Mayfield stayed upright and made a late throw to WR Donavan Peoples-Jones for a pick up of 13 to the 38-yard line. With the clock still running, on the next play, Mayfield was able to hit an out route to Browns player Rashard Higgins for eight yards. Higgins had the foresight to know he wasn’t down by contact by Bengals defensive back Darius Phillips and crawled on his knees to get out of bounds with 40 seconds to go. This saved the Browns precious time. After the review of that play by the referees, which likely gave the Browns more time to plan their next play, Mayfield went back again to Higgins on an incredible 33-yard throw and catch where Higgins extended his 6’1 frame to its maximum to haul in the throw.

The following seconds were even more amazing because of what the Browns did as a team. As soon as the ball was caught by Higgins, with the clock running and the Browns rushing to the line for the next play, Mayfield was able to spike the ball and kill the clock with 16 seconds left. However, before the Browns got set, WR Jarvis Landry, one of the vocal leaders on the Browns, was able to get Browns rookie tight end Harrison Bryant to get on the line of scrimmage, in which he wasn’t at first in the mad dash to run the play. Had Bryant not been on the line, the play likely would have been penalized for illegal formation and there would have been a 10-second runoff. This small detail to the play by Landry showing his leadership just showcased what the Browns are doing so much better now as a team. They’re working together. At this point, just go back in your memory with previous Browns teams coached by Hue Jackson or Freddie Kitchen and it’s inconceivable those teams would have ever come close to the precision that we saw on that last drive by the Browns under the direction of current coach Kevin Stefanski.

This takes us to the last play of the drive. Most Browns teams in the last 20 years would have done something here for all the wrong reasons. Maybe a penalty, maybe an interception by the quarterback. But this quarterback and this team are different and have been all season long. On this last play of the drive, Mayfield completed a beautiful 24-yard fade route to People-Jones who toe-tapped inside the endzone to complete the legendary drive and the win.

I’ve talked about Baker Mayfield in other articles, but I can’t emphasize enough how he is creating a new history for a new team of Browns that don’t know the losing ways of the team’s past. And that’s good. Before Mayfield started as the Browns quarterback in 2018, the previous 50 games, the Browns were 4-45-1. With Mayfield, the Browns are now 18-19. Many younger Browns fans have never seen a winning Browns team. And even my generation of fans hasn’t seen a quarterback or team off to this kind of start to a season. In 1994, the Browns got off to a 6-1 start and finished 11-5 only to lose in the playoffs. This Browns team with a 5-2 record, behind a young quarterback and young coach, is on the rise and doing things that are new and improved. And I sure hope in many backyards here in Northeastern Ohio that some kids now look to Mayfield as their superhero and are throwing the winning touchdown to Donovan Peoples-Jones in the back of the endzone! 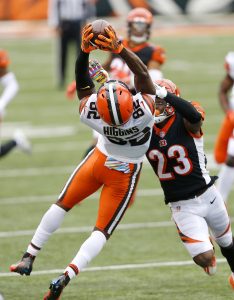