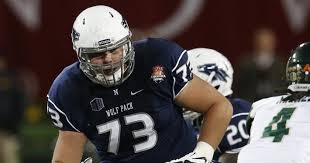 This pick was also a shocker, especially because names like Will Hernandez and Connor Williams were still on the board.

Corbett started 12 games at left tackle, taking over for current Browns’ LG Joel Bitonio. In his junior year, he played well enough to gain Second-Team All-Conference from league coaches. He was named a team captain as a sophomore in 2015 and garnered honorable mention All-Mountain West honors after starting every game at left tackle.

He is solid in most areas and has the ability to play center. It’s possible that he will kick outside to left tackle, replacing Joe Thomas or stay at left guard while Bitonio moves to LT.