3rd and goal: A concern with the Browns secondary 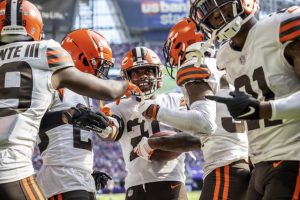 The Browns secondary has not had a great season so far. Yes, the Browns defense as a whole shut down both the Minnesota Vikings and the Chicago Bears but they’ve been humiliated several other games and gave up 47 points to the Los Angeles Chargers last week. There are injuries in the secondary. The durability of cornerbacks Denzel Ward and new rookie Greg Newsome are playing havoc with the defense being stable. There are lots of moving parts and that’s not good only being five games into the season.

The Cardinals come into Cleveland flying high with the likes of wide receiver great DeAndre Hopkins. He has 23 catches and 312 yards plus four touchdowns already this year. He’s been one of the most dominating receivers in the league for almost a decade. The Cardinals also have A.J Green, yes the former Cincinnati Bengals star on the team and he’s already had 16 catches for 261 yards and two scores. Add in Christian Kirk with 21 catches for 283 yards and that Browns secondary could have a problem Sunday.

Last week, Hopkins caught six passes for 87 yards and he scored the game-winning touchdown in the closing minutes against the San Francisco 49ers. The 49ers held the Cardinals high-flying offense in check much of the game. If the Browns can get to their quarterback Murray and cause his timing to be off that could be a victory for the Browns. Otherwise, Hopkins and the rest of his wide receiver mates could have a big day.

CLICK HERE TO VIEW NEXT PAGE – 4TH AND GOAL