2nd and goal: Who has the upper hand Mayfield or Murray? 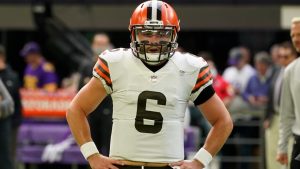 Former Oklahoma Sooner teammates and former Heisman Trophy winners will face off on Sunday. They’ve faced each other before when the Browns traveled out to the desert and Murray and the Cardinals won that game going away 38-24. It was a good game and both quarterbacks did well. Mayfield threw the ball 43 times in that game, too many when you have a good ground game and in that game, Chubb had 127 yards on only 17 carries.

This game should see both players going toe to toe. I certainly don’t believe Mayfield should be launching the ball more than 30 or 35 times in this one if the Browns are going to have any chance at winning. The Browns have been able to control the clock in almost every game and been in a position to win all of them.

Murray’s statistical numbers are better than Mayfield’s at this point of the season. He’s thrown for 10 touchdowns, 1400 yards through the air. He also has bounced around and scampered around the field on the run for 110 yards and three touchdowns. He’s an elusive quarterback with his quickness. He does tend to hold onto the ball a bit more than previous quarterbacks the Browns have faced this season so that could be a positive for our defensive lineman. But that elusiveness will also put more pressure on the Browns secondary to prevent big plays as Murray is dancing around the field.

Mayfield will be under the microscope in most of this game. It’s not as though he’s not used to that, but this is a big game for him to quiet the naysayers again. He handled that pretty well a week ago, but couldn’t get the win and the league is all about results. The Cardinals defense is respectable but not the best. They’re a plus five on turnovers. Cornerback Byron Murphy already has three interceptions on the season and their safety Bubba Baker has one so Mayfield needs to focus on his accuracy and keep his throws low and not overshoot his targets as he did in the Minnesota Vikings game.

This could be a high-scoring affair with these two former college teammates knowing this will be the game of the week. Could this also be, might I suggest a preview of the Super Bowl coming up with these two teams?

CLICK HERE TO VIEW NEXT PAGE – 3RD AND GOAL