4th down and for the win 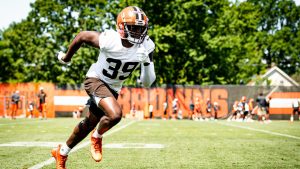 I’ll be watching two players in particular on defense Sunday. The first is Richard Lecounte III, the 5th round draft pick from Georgia. This kid has a knack for finding the ball and the player. He’s recorded two interceptions, probably should have had a third and can tackle well. This week veteran wide receiver Odell Beckham Jr. gave him a pair of his cleats. Lecounte was over the moon excited and will wear them at some point.

The other player is linebacker Elijah Lee. Has he done enough to secure a spot on this team? I sure hope so. He registered nine tackles a week ago and has really been playing well this training camp and preseason. Linebackers are needed by the Browns as linebackers like Mack Wilson and Anthony Walker have recently been injured.

Lee has experience too on special teams and that in itself should be enough to keep him on the regular-season roster.