Who is on the bubble? 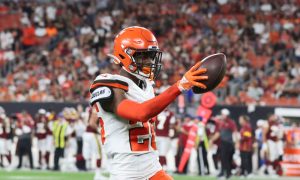 I’d say a player on defense that might have trouble making the final 53 man roster is cornerback Greedy Williams. With the drafting of Greg Newsome II and the bringing in veterans like Troy Hill from the LA Rams, he may have trouble making the final cut. Williams has been injured most of his time in Cleveland and although he was considered a cornerstone to the secondary when he was first drafted several years ago, he hasn’t contributed enough.

Another player that could be on the bubble is a player like defensive lineman Jordan Elliot, the high draft pick from last year. With the Browns likely keeping Malik Jackson and Andrew Billings that leaves them two maybe three more players from that position to keep. Sheldon Day has had a great preseason and has likely secured a spot.

So that leaves newly drafted Ohio State Buckeye Tommy Togiai in the mix with Malik McDowell, who had a great last game and Marvin Wilson, who is a rookie too and signed as an undrafted free agent. My guess is they keep Togiai and McDowell. Does the room have room for Elliot? I’ll say no unless he can turn it up big time under the lights of Atlanta.

CLICK HERE TO VIEW 4TH DOWN AND FOR THE WIN!!!