What other starters will we see? 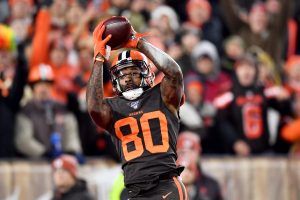 Will any of the Browns’ main starters on the line be playing such as Jack Conklin or JC Tretter? I’m guessing no, but I could be wrong. We could see a player like wide receiver Jarvis Landry start the game too.

Do we see Browns running backs Nick Chubb or Kareem Hunt? I doubt that too. As much as I’d love to see these two play some, risking a knee injury could change one of the biggest strengths the Browns have as a team. Other NFL teams know the Browns have the best running game in the league. Why risk that advantage?

I imagine wideout Donovan Peoples-Jones might be targeted by Mayfield early or Rashard “Hollywood” Higgins too.

I’d think Mayfield will air it out early for the NBC national tv audience watching. I’m sure NBC is thrilled that Mayfield and some of the other Browns starters will play some.