Cleveland Browns quarterback Baker Mayfield is going to play in this last preseason game against the Atlanta Falcons. That in itself is reason to tune in Sunday night on NBC for some “Sunday Night Football.” This training camp and preseason have been good in many ways for the NFL, but with only three preseason games played by all the NFL teams, when veterans and more experienced players played or didn’t has been an ongoing discussion by many.

The Browns have a lot to evaluate after Sunday’s game to get their current 80 players down to the 53 regular-season roster. Let’s take a look at some of those stories we’ll be watching going into the game Sunday.

What should we expect from Baker Mayfield? 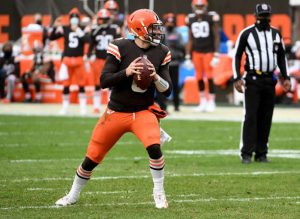 Browns coach Kevin Stefanski said on Friday that Mayfield along with some other starters will play some in the game against the Atlanta Falcons. How much Mayfield will play is up for some debate, but I’d imagine that he’ll get maybe one or two series at the start of the game.

While on the one hand, I’m excited to see Mayfield run a few plays, I’m also nervous because, like you, I don’t want my franchise quarterback injured prior to the start of the regular season.

With that in mind, it’ll be good to see Mayfield shake off some rust and get some plays worked on prior to the big first regular-season game against the Kansas City Chiefs.

I recently wrote about Mayfield and Browns wide receiver Odell Beckham Jr. and their continuous working on their chemistry together during this training camp. Beckham is coming off major knee surgery from a year ago. Obviously, Beckham won’t be one of the starters out there Sunday night, but I do expect Beckham to be ready for the Chiefs game.