I love my father. Let me just set that record straight before I continue writing. After all, most children live in their parents’ shadow, at least for a portion of their lives. This is especially true for the same-sex parent relationship.

Now, my dad is a cool guy but he isn’t LeBron James. Sorry, Dad, I’ve seen you shoot the rock and it’s just not happening. Neither of us is going to make the NBA, sadly.

However, LeBron James does have children, too. Three – to be exact. Bronny (LeBron James Jr.), Bryce Maximus and Zhuri.

Via SportsKeeda: Bronny James is the eldest son of Lebron James. He currently plays as a Point guard for Sierra Canyon High School in Los Angeles. He is currently the 24th ranked player in his high school class and has been labeled a 4-star recruit by ESPN.

LeBron James has previously expressed his desire to play with his son in the NBA before he retires. It’s expected that Bronny will be part of the 2023 NBA Draft. 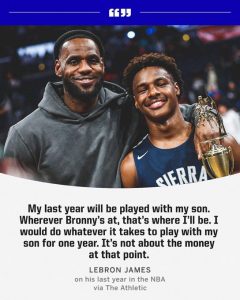 I would not like to live in the shadow of LeBron James, especially with the same name, simply because of the expectations that I would have from the general public. Now, Bronny (currently age 17) appears to be a good basketball player himself, but it is doubtful that he will be as good as his father at the game we all love.

However, LeBron does desire to play with Bronny in the NBA before he retires and it’ll just be a question of which team this duo will be on.

LeBron has also said when questioned on a potential return to Cleveland again, that the “door is not closed.” Interesting…

Let’s keep in mind that the Los Angeles Lakers are not a very good team at the moment. That team LeBron currently plays on is 27-31 and has only won three of its last 10 games to put themselves in 9th place in the Western Conference. Thus, it’s not like LeBron would be leaving much if he were to decide to COME HOME or leave for any other team.

Imagine LeBron returning to the Cavs, his son getting drafted by the team and the duo working together to win a championship here in Cleveland. That would be an absolutely amazing ending to a storybook career for the greatest of all-time in LeBron.

Now, his son may not feel the same way having to play in the shadow of Daddy. Yet, he’ll have the rest of his career when his father likely retires in the coming years to make his own mark as a player in the league. Hopefully, the two will be able to play well together and Bronny can make his own mark!

While I don’t think Bronny will be the Greatest of All Time, I don’t think he will have an issue proving to the world that he is great at basketball just like his father. It remains to be seen just how he creates his own story…

Giving away a Darius Garland Jersey!!!