It must be really awesome and horrible to be the son of LeBron James. For many reasons. From the second LeBron James Jr. came into this world, there was and still is an immense amount of pressure on the young man who is now 6’2 to “be a star basketball player like Dad”. However, the perks of being a part of a famous family are certainly there, as well.

In particular, rewind to the early 2000s when LeBron James Sr. was a high school star in the Akron, Ohio area at St. Vincent-St. Mary’s high school. This was back at the time where players could make the direct jump from high school to the NBA. Now, they must be one year removed from high school (usually playing college ball). This was also a time when the Cavs sucked. In 2002-03, the team finished 17-65 (.207).

The fairy-tale story was that this young man named LeBron, a player in this area, was going to get drafted by the Cleveland Cavaliers and turn the franchise around. The ping-pong balls did bounce in the Wine & Gold’s favor and the team ended up with the first overall pick. 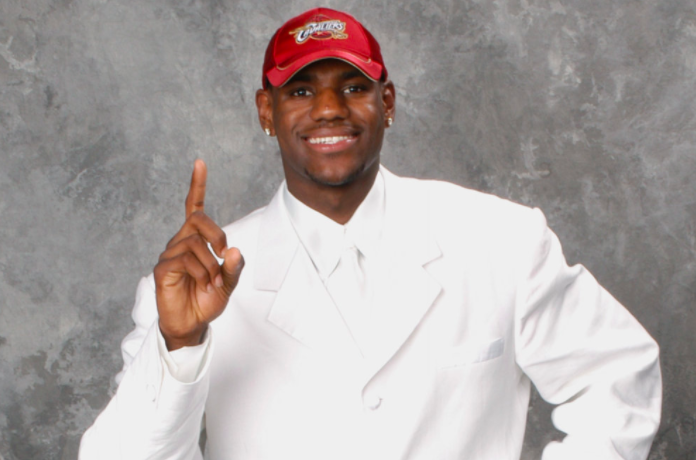 This story is well known. A great career, leaving, coming back and winning a title down 3-1, leaving again. However, the oldest son is becoming a young man and it will only be a few years before Bronny plays college ball…

Imagine if the Cavs were able to pick this budding star and continue a family legacy here in Cleveland. That would be incredible and so exciting for all fans, but especially those that had the privilege of watching King James for the majority of his career in Cleveland. There is even a chance that LeBron Sr. could play against, or maybe even with, Jr. Now, will the youngster be as great as King James? Currently ranked at four-stars, 89/100 and 24th on the top-25 of the class of 2023 (ESPN), it looks like improvements will have to be made. Only time will tell, but it would certainly be a difficult task to even come close. That’s not an insult, either. This is arguably the best player ever that James Jr. must live up to.

Finally, it is fairly certain James Jr. will finish Sierra Canyon High School in Los Angeles, go to a great college and eventually get drafted and play in the NBA. That is where the excitement would reach a boiling point if James Jr. was selected by the Cavs. Such tremendous pressure, of course, but also the love for LeBron is there.

There was a time when James was hated in Cleveland. That page is turned and is a part of the past. Despite the fact James Sr. did leave again, it is simply not the same because of the deliverance of a championship to this city in ’16 with the Cavs. One day, could James Jr. have a chance to win another championship for the Cleveland Cavaliers? Well, only time will tell, but it would be an incredible story that a plethora of fans, local and abroad, would love to be a part of. For now, hopefully, the NBA can just get back to playing ball!