Yes, Sunday was a bad game for the Cleveland Browns, but let’s remember that this is a screwed up year for all of the world and not just sports. With that being said, let’s look at the good, bad, ugly and how we fix it for next game.

The overall offense good: The Browns had a great comeback drive to almost tie the game at seven had it not been for a missed extra point. They also showed they can move the ball and the run game was actually doing well against a stout Ravens defense. Although Browns QB Baker Mayfield struggled against the Ravens defense, he was still 21/39 for 189 yards with one TD and one INT. Both RB Nick Chubb and RB Kareem Hunt also went over 50 yards apiece. This means that if the Browns stuck with the run game they could have kept the momentum and at least put the score at 17-10 going into halftime. The receiving core held up their end of the deal with WR Jarvis Landry and TE David Njoku leading the way for the receivers and Njoku scoring the team’s only TD of the game.

Overall offense bad: The Browns got away from the run game. Even when down 17-6 the run game was still effective enough to keep the defense wondering who was getting the ball between Chubb and Hunt. Dropped passes were also a big factor in Sunday’s loss. Odell Beckham Jr. dropped a crucial 3rd and 2 pass, which would have kept the drive alive and possibly a score when they had the momentum on their side. The offensive line also has to keep Mayfield upright and with that Mayfield needs to hit his targets. A few passes were off target, tipped, dropped and one pass was intercepted. Clearly, the offense needs to get the chemistry in order and fast. 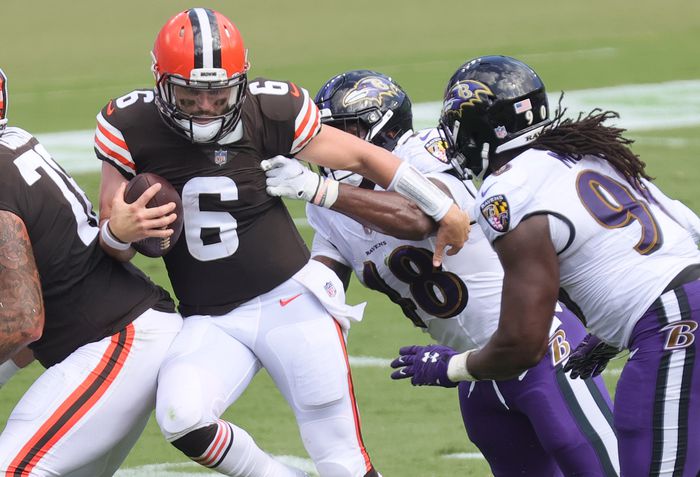 Overall defense good: The Browns were able to keep reigning MVP, Lamar Jackson, in check as a runner. Even getting a sack and getting pressure plays on him and only holding him to 45 yards as a runner for the entire game. Also, only allowing 113 yards between four different ball carriers. While that may not seem like an accomplishment to some, that is big considering that the Ravens have one of the AFC’s best rushing attacks. The Browns defense also generated a turnover.

Overall defense bad: While the defense kept Jackson in check as a runner, they failed to stop him as a passer. Jackson was 20/25 for 275 yards and three TDs. The main issue with this is that the defense was on the field entirely too long. None-the-less this is something that can be fixed during this week’s preparation for the Bengals on Thursday night.

How do they fix it?: With no preseason at all, it’s no secret that the first two weeks of the season were going to be ugly for some teams and so far it has shown. Penalties will be cleaned up in practice. The biggest thing for the Browns going into Thursday night’s game is that they stick to the run. We all know the last few seasons the Bengals have had a subpar front seven. So the Browns should take advantage of this with both Hunt and Chubb being more than capable of going over 100 yards against this defense. The Browns can also put their short passing game to some real use. Both tight ends Hooper and Njoku can easily eat up the middle of the field and seams. If the offensive line keeps Baker Mayfield up and not scrambling around, he can do some serious damage. Especially with Jarvis and Odell on the outsides or lined up on the same side.

Defensively, the Browns need to get off the field on third down. Let’s not forget that the Browns come in with a top-10 defense from last season, so they have the ability to get sacks and turnovers. And with a short week, this should be the main focus for the defense. The Bengals offensive line doesn’t really have a lineman who’s strong enough to block DE Myles Garrett one on one. If he gets double teamed, I expect the rest of the defensive line to have a field day getting to QB Joe Burrow.

Final prediction: I predicted the Browns to continue their new dominance over the Bengals. This is a rivalry game, so I expect Baker to keep the streak alive in the Browns home opener. If the run game stays part of the game plan, the Browns will run away with this one easily.

Baker will have a fire lit under him and the Browns run circles around the Cats, 31-13.