Social media certainly has its benefits, but it can also be extremely toxic for a number of reasons. Browns quarterback Baker Mayfield made this announcement on his Instagram story: 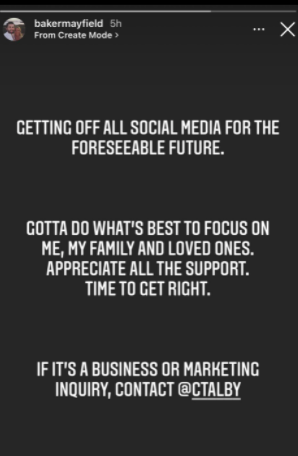 Now, the actual act of taking a break from social media is not a bad thing at all. Except, how will Mayfield get easy access to the links that lead him to the Cleveland Sports Talk website? While I joke, it’s more the announcement itself that I find puzzling.

Mayfield is a notable player in the NFL and is going to take criticism and plenty of garbage from people on social media platforms such as Twitter, Instagram, etc. That’s simply a part of being in the spotlight and carrying the responsibility of leading a team. Any famous person regardless of the field knows this fact…

My concern is that if something as trivial as social media “gets” to Baker, then how is he able to handle himself with the real job of being a successful quarterback and everything that comes with it?

Baker has had well-documented shoulder issues throughout the past season and just recently had a successful surgery. He should be ready to start throwing soon. Depending on the direction the Browns choose to take, Mayfield will be the starting quarterback in Cleveland for 2022.

I’m no therapist (I do see a good one, though), but in life, if one lets the little things get to them it’s only going to cause bigger problems. Then that leads to the question I just asked which focuses on how the said person handles the big issues.

You’re ignoring the idiots that make stupid comments and have no real value to your life. Are you, however, able to handle a situation where it’s 4th and 12 in Pittsburgh with a roaring crowd and the Browns down 27-21 with a minute left in the playoff game from the 37-yard-line with a touchdown needed to advance to the next round?

That will be the true test, my friend. Not watching Curb Your Enthusiasm with your wife Emily instead of scrolling the Twitter feed late at night. Fantastic show, by the way.

The Browns quarterback situation still remains to be seen and there is a chance the team could head in a different direction. If it’s Baker, he’s going to have to find a way to ignore the haters and focus on the task at hand. Bringing that coveted Super Bowl to Cleveland.

Now, Baker. Say you do win the Super Bowl…

Everything will be A-OKAY! Here's why Deshaun Watson makes it through these allegations! HERE:
https://clesportstalk.com/why-browns-qb-deshaun-watson-will-be-okay-and-make-it-through-the-allegations/